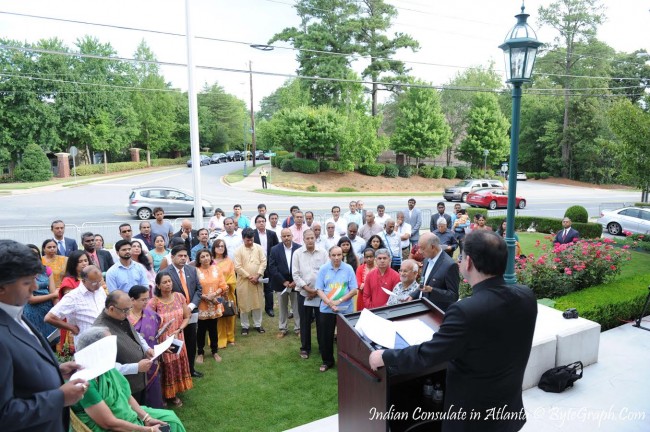 Atlanta, GA, August 17: India’s 70th Independence Day was celebrated with patriotic fervor and national pride at the Consulate General of India in Atlanta. The celebration on the sunny Monday morning, Aug 15, 2016, was attended by over 200 community members including Consulate General Nagesh Singh, consulate officials, staff and families; leaders and representatives from Indian American organizations of Georgia, corporations and community members.

Everyone clapped with joy and pride as the tricolor was unfurled by Consul General Singh and the flower petals gently floated on the consulate lawn. The gathering, enthusiastically joined in singing India’s national anthem ‘Jana Mana Gana’ 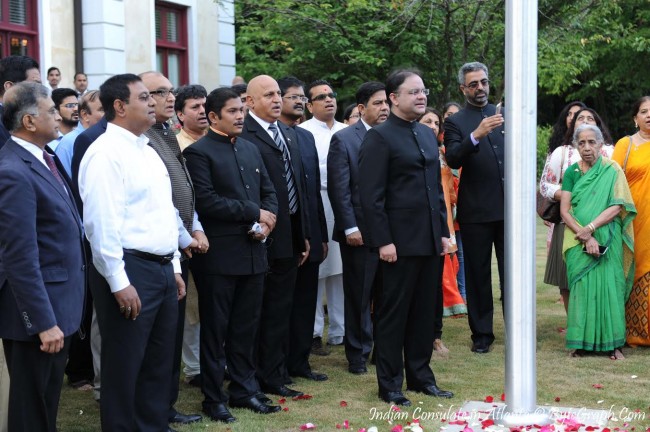 Nagesh Singh said he was heartened to see an impressive turnout despite it being a busy working day. “It shows your love and affection for the motherland and for that I am very grateful to you all.”

As is customary, he read the President of India, Pranab Mukherjee’s address to the nation on the eve of India’s 70th Independence Day.

Here are a few excerpts from the address:

“I respectfully bow to the heroes of our independence struggle-known and unknown-who fought, suffered and sacrificed their lives to win freedom for us. Mahatma Gandhi’s luminous leadership finally made the British Quit India in 1947.

In the just concluded session of Parliament, the passage of the Constitution Amendment Bill for the introduction of GST (Goods and Services Tax) is reason enough to celebrate our democratic maturity.

The safety and security we provide to our women and children determines the well-being of the state and society.

Polarizing debates only deepen the fault lines in public discourse.

One unique feature that has held India together is our respect for each other’s cultures, values and beliefs. In the networked environment of today, a caring society can only be developed by harmonizing religion with modern science.

Backed by strong political will, we have to create a future which will economically empower six hundred million youth, build a digital India, a start –up India, and a skilled India. As we build an India of hundreds of smart cities, towns and villages, we must ensure that they are humane, hi-tech and happy places leading to the creation of a technology-driven but compassionate society.

We as a nation must nurture creativity, science and technology. Here, our schools and institutions of higher learning have a special responsibility.

A normal monsoon this year gives us reason to cheer…Inflation has remained below 6% and agricultural output has been stable,…a testimony to our nation’s resilience, and to how far we have progressed since independence.

We have reinvigorated our historic bonds of friendship with traditional partners of Africa and Asia Pacific.

For all the challenges that we see in front of ourselves I have a great belief in our innate and inherent capacity as an ancient history whose soul and jijivisha-the will to live and excel can never be suppressed.

India through its unique civilizational contribution has repeatedly conveyed the message of peace and harmony to the trouble-torn world.

On this occasion, I convey my special greetings and gratitude to the members of our armed forces, paramilitary and internal security forces, who are at the fore front of guarding and preserving the Unity, Integrity and security of our motherland.”

In his impassioned short address, Consul General Singh assured the gathering that India has come a long way since its Independence in 1947.

“The biggest thing that has happened in our country is that we are cognizant of our challenges-poverty, illiteracy, poor health, social issues like the caste system etc,” he said “And once you recognize these problems half the battle is already  won. Despite the problems we face-1.2 billion people in a democratic framework are moving ahead on all fronts. In my view it is the greatest experiment in world history. Let’s all work together and not be critical of each other. Dialogue is the way forward. Rather than using virtual space, share your thoughts and ideas about India by interacting personally with us.”

The gathering was invited to watch an informative short documentary on a resurgent independent India.