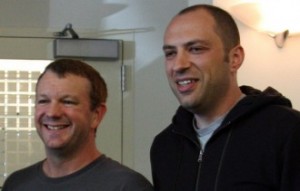 Run by just 55 employees, WhatsApp has over 450 million active users.

Koum and Acton are among 26 newcomers who made it fresh to the annual list, alongside Twitter’s Evan Williams, who has a fortune of $3 billion.

Mexican telecommunication magnate Slim Helu came in second with his fortune of $72 billion.

However, according to the Forbes report, it was Facebook founder Mark Zuckerberg who made the most money in the world over the past year.

From 2013’s estimate of $15.2 billion to $28.5 billion this year, Zuckerberg’s net worth nearly doubled within one year.

This year’s annual rich list has the largest number of female billionaires ever, said Forbes.