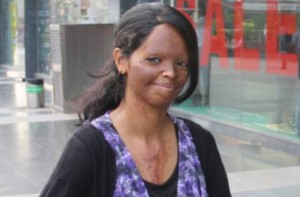 Washington, March 4 (IANS) Laxmi, a “Stop Acid Attacks” campaigner from India is one of the ten “extraordinary women from 10 countries with the 2014 Secretary of State’s International Women of Courage Award” here Tuesday.

US First Lady Michelle Obama will join deputy secretary of State Heather Higginbottom as the latter presents the awards Tuesday.

The award annually recognizes women around the globe who have demonstrated exceptional courage and leadership in advocating for peace, justice, human rights, gender equality and women’s empowerment, often at great personal risk.

Since the inception of this award in 2007, State Department has honored 76 women from 49 different countries.

According to a State department biography Laxmi was 16 when an acquaintance threw acid on her face while she waited at a bus stop, disfiguring her permanently.

Her attacker, a friend’s 32-year old brother, planned to use the acid to destroy Laxmi’s face after she refused to respond to his romantic advances.

Unlike many acid attack victims who never return to normal life, Laxmi did not hide and “became the standard-bearer in India for the movement to end acid attacks.

She made repeated appearances on national television, gathered 27,000 signatures for a petition to curb acid sales, and took her cause to the Indian Supreme Court.

Laxmi’s petition led the Supreme Court to order the Indian central and state governments to regulate immediately the sale of acid, and the Parliament to make prosecutions of acid attacks easier to pursue.

“Much is left to be done, and Laxmi continues to advocate on behalf of acid attack victims throughout India for increased compensation, effective prosecution and prevention of acid attacks, and rehabilitation of survivors,” the State department said.