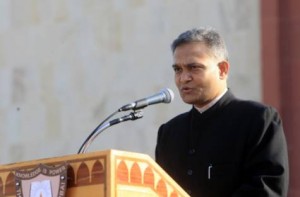 Addis Ababa, Dec 15 (IANS) In a gesture well appreciated here, Indian businessmen and the Indian community here have come to the aid of hundreds of thousands of Ethiopian returnees from Saudi Arabia.

Sanjay Verma, newly-appointed Ambassador of India to Ethiopia, accompanied by Mayur Kothari, the convener of the Indian Business Forum (IBF) and Rajeev Sharma, Deputy Convener of IBF along with leading Indian businessmen, presented a cheque of half a million birr ($26,182) to Ethiopian returnees from Saudi Arabia.

“The embassy as well as IBF and the community will support the Government of Ethiopia and its people for any other assistance they may require,” Verma told IANS.

The ambassador presented the cheque to Ethiopia’s State Minister of Agriculture Mitiku Kassa, who said that the support made by the IBF and the Indian community is very well acknowledged. The team visited the International Organisation for Migration (IOM) officer and thereafter visited the returnee transit camp at the airport.

When Ethiopia started repatriating its citizens living illegally in Saudi Arabia last month, 30,000 people were expected to return. Today, four times that number have been repatriated – with numbers still swelling daily – straining agencies to support one of the largest human airlift operations in recent history.

However, there is not really a time frame when the arrivals will end, according to Ethiopia’s ministry of foreign affairs.

Around 200,000 women sought work abroad in 2012, according to Ethiopia’s ministry of labour and social affairs.

IOM Senior Operation Officer and Officer in Charge (OIC) for the Chief of Mission, Gabriel Okutoi, on his part, said that IOM appreciated this kind Indian gesture “at a time when we are assisting thousands of returnees”.

“The gap we have is quite big, like $13 million, and it tends to increase because we started with 30,000 and went to 80 and now potentially at 118,000 immigrants, we have surpassed our targets and these supports contribute.”

Receiving the donation, IOM Ethiopia Chief of Mission Josiah Ogina expressed his gratitude for the generous support made by the association to support Ethiopian returnees.

There are many expecting mothers and any kind of support for children and women in terms of sanitary items would be helpful, Gabriel said. “The embassy volunteered to come here to support us; we really appreciate their contribution”, Ogina told IANS.

“The Indian community will stand by for any of assistance that may be required to provide to our brothers and sisters of Ethiopia in this hour of need,” Verma said.