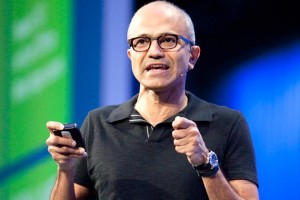 Washington, Feb 5 (IANS) Shortly after he was named the new CEO of Microsoft, Hyderabad-born Satya Nadella shot off a letter to employees asking the software giant to “prioritize innovation” and “help drive cultural change.”

“While we have seen great success, we are hungry to do more,” wrote Nadella, only the third CEO in the company’s 39-year history, Tuesday after taking over from Steve Ballmer with founder Bill Gates by his side in a new role as “technology adviser”.

“Our industry does not respect tradition – it only respects innovation. This is a critical time for the industry and for Microsoft,” wrote the 22 year Microsoft veteran, who before his elevation headed one of its fastest-growing divisions-the Cloud and Enterprise Group.

“Make no mistake, we are headed for greater places – as technology evolves and we evolve with and ahead of it. Our job is to ensure that Microsoft thrives in a mobile and cloud-first world.”

Sharing “some background on myself and what inspires and motivates me,” Nadella, 46, who has been married for 22 years and has 3 kids, wrote: “Many who know me say I am also defined by my curiosity and thirst for learning.”

“I buy more books than I can finish. I sign up for more online courses than I can complete. I fundamentally believe that if you are not learning new things, you stop doing great and useful things. So family, curiosity and hunger for knowledge all define me,” he wrote.

Nadella said he was at Microsof “for the same reason I think most people join Microsoft – to change the world through technology that empowers people to do amazing things. I am here because we have unparalleled capability to make an impact.”

Paraphrasing a quote from Oscar Wilde – we need to believe in the impossible and remove the improbable – he wrote, “This starts with clarity of purpose and sense of mission that will lead us to imagine the impossible and deliver it.”

But, would Nadella, who attended Hyderabad Public School in Begumpet and earned a Bachelor of Engineering in Electronics and Communication from the Manipal University before coming to the US, be free to take forward his plans.

The Wall Street Journal had some doubts. Gates’ return to the company in his new role “raises questions as to how free a hand Mr. Nadella will have in setting his own strategy as the company responds to an array of business challenges.”

“Mr. Gates, while known for his technical expertise, is also linked to past Microsoft product stumbles and has little track record in areas such as smartphones, which are critical to the company’s future,” it said.
Technology magazine Computerworld also suggested that Nadella was toeing the Ballmer line in reiterating the company’s strategy of becoming a provider of hardware devices and cloud services.

“Whether that’s a good first sign or a bad one depends, of course, on whether one believes that Microsoft is generally on the right track or that it needs instead to be shaken up,” it said.

The New Yorker said, “The Microsoft that Nadella is inheriting is different from the one that Steve Ballmer took over in 2000” when “Microsoft was perhaps the most powerful and influential technology company in the world.”

“This makes Nadella’s challenge all the more profound: he cannot merely finish constructing the world for which he’s been handed the blueprints; instead, he must begin to imagine a wholly new one,” it wrote.