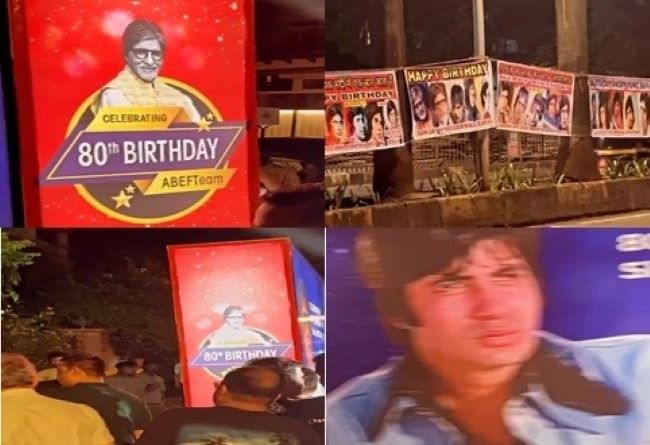 Copying film actors and stars is nothing new, but when parents and elders tell you to learn from one is something surprising. Rarely does one come across a personality from the film industry whom the common families love to present as an example before the youngsters, in particular. Amitabh Bachchan fits this idea for a typical Indian family that loves to cling on to benevolent values and duties.

Big B, for millions in India, represents the epitome of humanity, simplicity but full of grace, patience, kind-heartedness and above all so much rooted to culture and yet open for change. This is best manifested by the immense popularity of his KBC show. The fact that there were other stars, who tried to anchor the show and those similar to it could not last long, proves Big B’s aura to pull the audience with his modesty, both in words and deeds.

At an age when most retire to a very quiet and uneventful phase which is mostly spent in and out of hospitals and doctor’s advice, this tall man amazes the young and old with his energy, dedication and passion. It is not that he has no ailments, but his strength and never-diminishing will to do is what sets him apart from the rest. Sitting in the KBC chair, he is a friend to all contestants, humbly treating all and making the people around him feel that they are king-like.

What endears Bachchan to all, especially the middle class is the way he approaches the people. All women are Devis to him and their mothers as Mataji, no matter the Mataji may be half his age and similar goes for the men, who are ‘sajano (gentlemen)’. He uses “aap” for all and even though the person may be like his grandson, it is never “tu” for anyone. It is “aabhar (thankful)”, “abhinandan (greetings)”, etc. words that parents and elders want the children to learn. Whenever he mentions his parents, there is a kind of reverence that his expressions and words manifest. This is something which touches the people’s hearts making them feel that he is real and not just a makeup-laden actor.

Big B has seen his popularity soar with the TV show at an age when most of his counterparts have very little work on hand or the common 80-year-old crowd has almost no dreams to pursue. He had his share of initial ups and downs, but ‘Zanjeer’ in 1973 catapulted him out of nowhere to the big league and the youth discovered their agitative emotions in him. The ‘Angry Man’ became the symbol of the then restless youth. The 1970’s, ’80’s and a bit of 1990’s were his, but it was the 2000s that saw him again come up after a series of failed ventures and miserably flopped movies.

When all had written him off, he was again catapulted from the depths of failures to the national stage, first through KBC and then a series of movies where his performances were too remarkable to go unnoticed. Amitabh Bachchan was back in the new Avatar, the Big B of Bollywood.

A child in ‘Paa’, the nagging father in ‘Piku’, stubborn teacher in ‘Black’, the 102-year-old father of 75-year-old Rishi Kapoor in comic ‘102 Not Out’, or the striking role of a retired lawyer in ‘Pink’. These are just a few, there are so many others like the ‘Sarkar’, etc.

Each of these roles is a masterpiece, with a certain message. ‘Pink’ gave the voice to millions of women, who got the phenomenal statement in that conspicuous word “No”, which the retired lawyer so effectively uttered during the courtroom scene. “No means no” — the three words struck a chord with young women who want to enjoy life as individuals with liberty. The courtroom drama was well appreciated and Amitabh Bachachan as lawyer Deepak, forces one to face up to some uncomfortable truths of the society.

Before ‘Pink’, ‘Baghban’ touched the raw nerve of the people which showed how elders are treated as a burden by their children. Many related themselves to the movie characters.

If the ’70’s and the 80’s movies of the Big B were mostly about anger, action and show, the 2000s has seen his superb acting skills in movies, and remarkable and unparalleled hosting for the TV programme.

At an age when memory for most is failing and bone and muscle health is declining, Big B presents an example that proves it’s all about attitude and will power.

There is no stopping this legend. He has proven that age is just a number and this is just what the people are loving him for.

On his 80th birthday, the living legend is all the more towering and humbler.