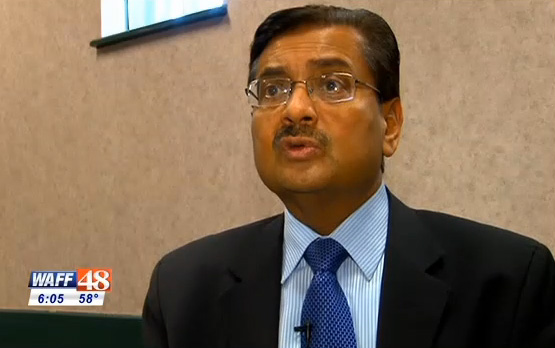 Atlanta, GA: The Consul General of India in Atlanta, Ambassador Ajit Kumar, who is still in Alabama, released a statement to NRI Pulse this afternoon about the incident involving the police assault on Sureshbhai Patel. “We are extremely concerned about the incident involving Mr. Sureshbhai Patel, an Indian national. We take the incidents involving an Indian national very seriously. We are pursuing this matter suitably, in Delhi through the U.S. Embassy, in Washington DC through our Embassy as well as in Alabama through our Consulate General,” the statement said.

“We are in touch with local officials as well as the family of Mr. Sureshbhai Patel and the doctors who are attending to him. Our understanding of the situation is that while there has been some progress, the medical condition of Mr. Sureshbhai Patel is still a matter of concern. The police chief of Madison County has taken action at his level. We understand there is an effort at the federal level also.”

“For us, it is important that the Indian community, which is a peaceful, highly regarded community, which has contributed in immense ways to Indo-US relations, and is a bridge between India and United States, feels safe and secure,” the release added.

The police officer Eric Parker, who assaulted Sureshbhai Patel, 57 on Feb 6 while he was taking a walk in front of his son Chirag Patel’s house in a Madison, Alabama suburb was arrested last Thursday.

Parker was released on $1,000 bond from the Limestone County Jail. A court appearance has been set for him for March 12, according to WAFF-TV, a local news channel,

Patel, who had come from India recently to look after his grandson who was born prematurely, filed a lawsuit Thursday saying his civil rights were violated. It seeks an unspecified amount of money. According to the lawsuit, Patel said he tried to tell the officers that he doesn’t speak English, saying “No English. Indian. Walking.”

According to the lawsuit, Patel was paralyzed in his arms and legs after officers forced him to the ground, his face bloodied.

“We certainly wish Mr. Patel a full recovery from his injuries. Our thoughts are with his family,” she said declining further comment as “this case is under investigation.”

The lone Indian Congressman Ami Bera, who is also co-chair of the Congressional Caucus on India and Indian Americans and a member of the House Foreign Affairs Committee, called the incident “horrible and tragic.”

Noting that the FBI has opened an investigation, he said: “Moving forward, we must come together as a nation to tackle the very real issues our minority communities face, and to rebuild trust and understanding among law enforcement agencies and the diverse communities that they serve.”

“In no way should the colour of someone’s skin or their limited English proficiency lead to the type of confusion and unreasonable use of force that left Mr. Patel partially paralysed,” saidChu.

“As we await the FBI’s findings, I will continue to work with my colleagues in Congress to ensure that this type of profiling and excessive force is no longer permitted by law enforcement,” she said.