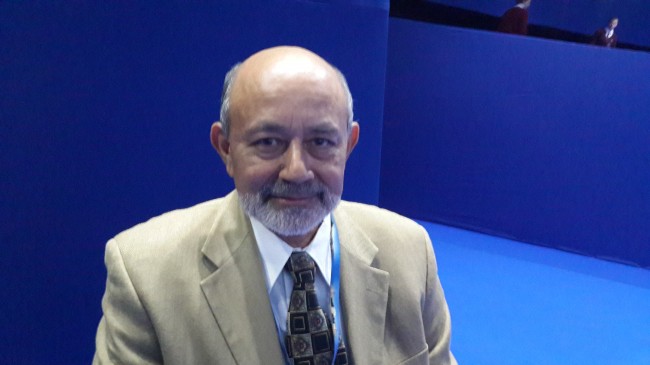 St Petersburg, June 18 (IANS) B. Jayant Baliga, a US-based Indian-origin scientist, is being awarded Russia’s top technology award in recognition of his work as a major development in energy management which brought about huge increase in efficiency and major savings.

The award will presented to Professor Baliga and Shuji Nakamura on Friday by Russian President Vladimir Putin at a ceremony here.

Nakamura, a Nobel Laureate, is being recognised for his work on blue light emitting diodes (LEDs). In Russia, the Global Energy Prize is known as the electronics equivalent of the Nobel Prize.

Professor Baliga invented the digital switch or the insulated gate bipolar transistor (IGBT) while working at General Electrical research & development centre in New York state in the US in 1983. The IGBT switches energy hundreds of thousands of times a second, raising the efficiency of any equipment manifold.

“Every equipment from your refrigerator to lights to motor vehicles has the need to use energy efficiently. If you take away the IGBT today, almost everything will come to a standstill,” Baliga told a visiting IANS correspondent on the eve of receiving the award.

Scientific American magazine called him among the ‘eight heroes of the semiconductor revolution’, and President Barack Obama awarded him the highest American technology prize last year and he is the 2014 recipient of the IEEE Medal of Honour, a rare distinction.

Professor Baliga, who now teaches to the North Carolina university as ‘distinguished university professor’, said that the IGBT that his invention combines two streams of electronics and electrical engineering and has possibly saved the world around $24 trillion dollars by raising efficiency, according to one detailed calculation.

“I got zero out of it. But then I did it all for humanity.”

Of course, says Prof Baliga, that he did make some money when he started three companies, but these were financed by venture capitalists who exited with enormous profits at the right time.

He says every motor today is at least 40 percent more efficient, the light bulb like the CFL better by almost 75 percent and a motor vehicle saves over 10 percent fuel because of his invention. He has written 19 books and over 500 papers in peer-reviewed journals.

Baliga passed out of IIT Madras before going to the US for his MS and PhD after electrical engineering after which he joined GE where he spent over 15 years.

After his ‘switch’ was invented, several of his colleagues told him that it would not work, and many scientists said he would fall “flat on his face”. But he said it stood the test of time.

The chairman of GE at that time, Jack Welch flew down especially to meet him when he heard what it could do. GE used the switch in the several of the equipments it sold, including medical devices.

A US citizen since 2000, he now has very little connection with India and does not travel to his home country much, especially after his parents and parents of his wife passed away. But, says Prof Baliga, an invention like his is unlikely in India, because it needs huge research infrastructure to be in place from universities to industries.

He feels, that India has a potential which has not been fully used, although in software “it has made great strides”.

Could a Nobel be on its way in the future? “I used to say no way,” but with so many recognitions and this “global prize where I am being feted with a Nobel Laureate, who knows”, he says. His regret though is that India does not know much about him.

“Top scientists that I meet always ask me, why has India not recognised your achievement?” And with characteristic modesty, Baliga told IANS, “I tell them that perhaps my country does not know about what I did.”