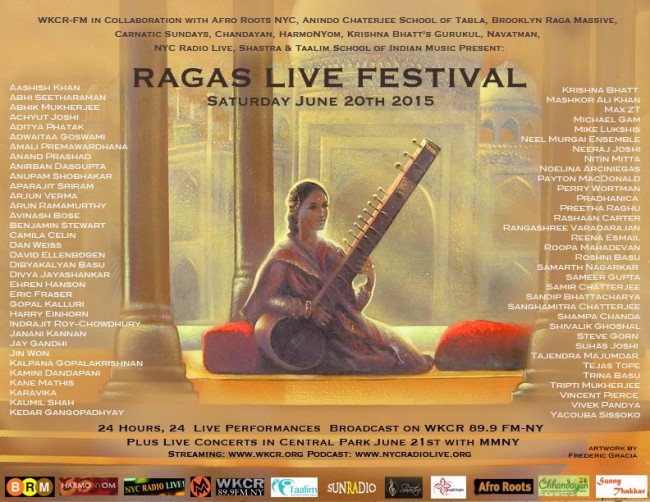 New York, June 18 (IANS) A unique 24-hour Indian classical music marathon, the Ragas Live Festival, with a multi-national and multi-ethnic cast of over 60 musicians is set to be broadcast this weekend here and streamed live on the Internet for listeners around the world.

It is billed as longest broadcast of Indian classical performed live. “From what I understand, even in India, they have not produced in-studio broadcasts on this scale,” Executive Producer David Ellenbogen said.

This is the fourth Raga Festival and this year it will add a six-and-a-half-hour free concert at the Central Park on Sunday, which is the day of the Summer Solstice.

Sunday is also International Day of Yoga when there will be a yoga session in Times Square with the expected participation of 30,000 people. The Raga Festival is not a part of that program, but it also reflects the growing interest in Indian culture here.

“We are experiencing a raga renaissance in New York City,” Ellenbogen said. “There are so many amazing musicians collaborating within and beyond the genre. This festival is a result of that and has gained a growing international audience.”

The festival is a collaboration between Columbia University radio station WKCR 89.9 FM-NY and 13 other organisations.

The marathon will be streamed live on www.wkcr.org and it will be archived at the station’s website and at www.nycradiolive.org for listeners to hear it later.

Besides Hindustani and Carnatic classical music, the new genres and the collaboration across traditions that are emerging in New York will be represented at the festival.

Yacouba Sissoko from Mali who plays the kora, a 21-string instrument from West Africa, is to perform with Jay Gandhi on the bansuri and Ellenbogen on the guitar. Sissko and Bansuri perform at the monthly Africa/India Collaboration concerts produced at Brooklyn Raga Massive events.

Carnatic compositions in jazz interpretations by Arun Ramamurthy Trio (ART) and Chamber Raga form by Karavika are also on the program.