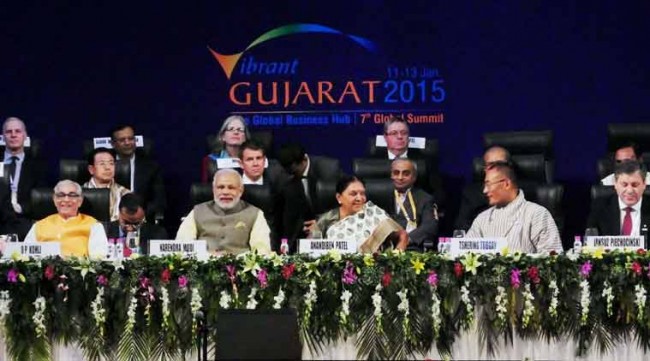 Patel said that a record over 21,000 MoUs (memorandums of understanding) were signed on the first two days of the three-day summit.

She said that 1,225 strategic partnerships were signed during the biennial summit, the biggest one so far.

Over 25,000 delegates from 110 countries, including over 2,500 foreign delegates from 56 international delegations participated in the summit, a senior Gujarat government official said here.

The trade show, held in an area of 125,000 square metres, saw footfalls of over one million in just two days, the official said.

“Though the summit is for investment in Gujarat, it will help in attracting investment for India and for the success of ‘Make in India’ idea of Prime Minister Narendra Modi,” the chief minister said.

In New Delhi, an US embassy spokesman said: “Today, US Secretary of State John Kerry and his delegation completed a historic two-day visit to the biennial Vibrant Gujarat Summit.

“While in Gujarat, the secretary discussed the importance of the U.S.-India strategic partnership, and how US technology and innovation can enhance sustainable economic growth throughout the Indo-Pacific region.”

“The secretary also attended the Global CEOs Conclave, where he spoke to international business leaders and innovators on strengthening trade and investment ties between the United States and India. In a separate bilateral meeting, Secretary Kerry and Prime Minister Modi discussed how the United States and India can together affirmatively shape global politics and economics in the 21st century, and the opportunity for our partnership to bolster sustainable economic growth in India and across the world,” the spokesman added.

Kerry headed to Pakistan from here for meetings. His motorcade, while on way to the airport, was involved in a minor accident. However, Kerry was unhurt and continued the journey.

Addressing the summit at the valedictory event here, union Home Minister Rajnath Singh said that the summit was a brainchild of Prime Minister Narendra Modi when he was chief minister of Gujarat.

“He (Modi) has changed the political idiom and political discourse of this country. The Gujarat model of good governance and development can be adopted for the whole country,” the home minister said, adding that “Gujarat was not only the land of opportunity but the mother of opportunity”.

Proceedings of the summit began Sunday at Gandhinagar’s impressive Mahatma Mandir convention centre, spread over a 55-acre complex comprising conference venues, exhibition halls and landscaped gardens, in the Gujarat capital, and saw the biggest participation from other countries this time.

Business meetings of companies and corporates will take place Tuesday.