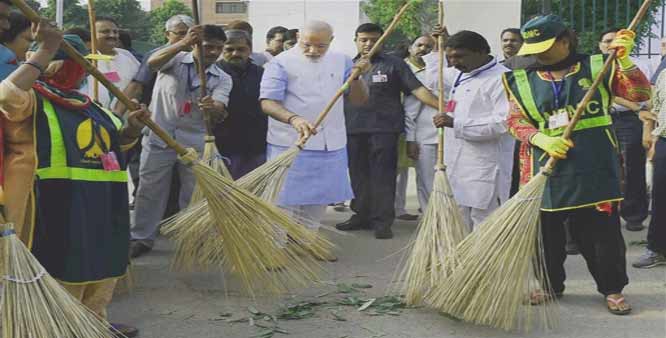 New Delhi, Oct 4 (IANS) Prime Minister Narendra Modi’s US visit that saw him take up the issue of hygiene and toilets for all Indians during his much-applauded talk at New York’s Central Park has also led to the US aid agency USAID and the Gates Foundation join in his mission of improving water, sanitation and sewage in municipalities across India.

The prime minister’s five-day visit, (Sep 26-30), also saw him discuss his plan of skill development for Indian youth and the development of smart cities and the two countries have also agreed to work together in these spheres, an official source said.

India and the US have also agreed to collaborate in the smart cities plan with India’s urban development ministry in partnership with US firms to develop three Indian cities — Allahabad (Uttar Pradesh), Ajmer (Rajasthan) and Vishakhapatnam (Andhra Pradesh) as Smart Cities.

The US firms are to be the lead partners in the project, the source said.

The urban development ministry is working out the details of the collaboration for these three cities which will be at the cutting edge of current Smart City technologies.

The US is also participating in the Water, Sanitation and Hygiene (WASH) Partnership for 500 cities under which water, sanitation, solid waste management and hygiene are topmost in the priorities for the Modi government.

Modi launched Swachch Bharat on Oct 2, Gandhi Jayanti, as a national campaign for cleanliness, eliminating open defecation and improving sanitation in the country.

The WASH partnership with USAID and involving business and civil society – such as the Gates Foundation – will serve as a knowledge partner for municipalities and state governments to leverage private capacity for innovation, expertise and technology to upgrade water, sanitation and sewage, the source said.

This initiative will cover 500 cities under the National Urban Development Mission and will be a step towards achieving the goal of Swachch Bharat.

The US is also a major contributor towards the prime minister’s initiative of skill development. India and US have agreed to collaborate on rapidly accelerating world class skill development in India to prepare young Indians for 21st century employment opportunities.

As part of this, the US will help bring global standards for skill development in India through nation-wide certification systems and new institutions such as Skills Universities, the source said.

The Global Initiative of Academic Networks (GIAN, or Knowledge) partnership for higher education will see collaboration between academic institutions in the two countries to help overcome the lack of faculty in India, which will invite and host up to 1,000 American academics from the top 100 universities each year to teach here at their convenience. They would continue to draw their remuneration from the US universities while being paid an honorarium for their work here, the source added.

India and the US are to also enter into a knowledge partnership for a new Indian Institute of Technology. One of the most visible successes of India-US partnership in the education field has been the setting up of IIT Kanpur, which is among the best technical institutions in the world and was set up with US assistance through a consortium in the 1960s.

Renewing the links in this area after 50 years, US will now be the knowledge partner for one of the new IITs to be set up in Goa, the source said.

This would be done through a similar consortium of top US universities so that the curriculum, faculty and facilities at IIT Goa will be at the cutting edge of technology and innovation.