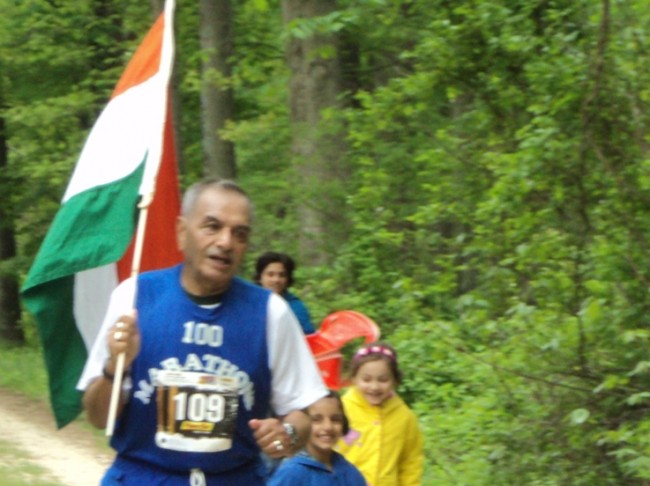 Washington, Oct 6 (IANS) India’s marathon man Ashis Roy has added another half marathon to his bag to take his overall tally to 139 as he completed his 24th 13.1-mile run in the fifth Woodrow Wilson Bridge Half Marathon in Alexandria, Virginia.

Running in chilly weather, Roy, 82, the oldest runner participating in the half marathon Sunday, finished first in the 80-plus group with a time of three hours and 40 minutes, 12 minutes more than his last run in the Navy-Air Force Half Marathon here last month.

Roy’s daughter Amrita, 42, also joined the Chittaranjan Park, Delhi, resident on his fourth run in the US this year.

About 3,500 runners including some from Ethiopia, Kenya, Eritrea, Morocco joined Sunday’s run deemed as one of the 27 best half marathons in the US by Runner’s World Magazine last year.

Boasting one of the most scenic and historic courses in the US, the race began from the first American President George Washington’s estate of Mount Vernon and travelled up George Washington Memorial Parkway along the Potomac river.

Then after an out-and-back on the quaint streets of Old Town Alexandria, the course crossed the Potomac River on the Woodrow Wilson Bridge into the finish festival in National Harbour, Maryland.