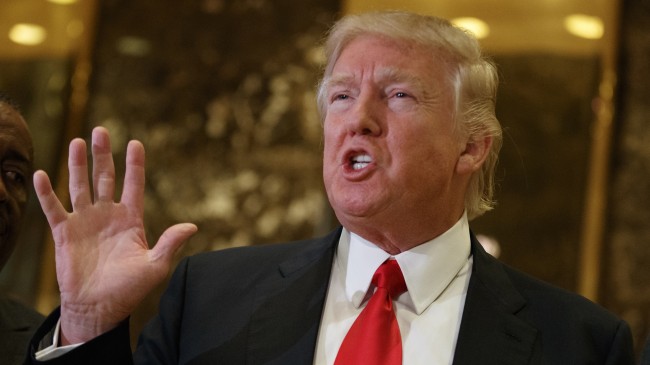 Washington, Jan 23 (IANS) An angry US media has lashed out at Donald Trump for terming the media “dishonest”, as the unapologetic new US President entered his third day in office.

Both The New York Times and Washington Post, among others, slammed Trump’s “false claims” on the inauguration-day crowd, which he put at around 1.5 million, and also slammed his Press Secretary Sean Spicer for making “false statements”.

Kellyanne Conway, counselor to Trump, said on NBC’s “Meet the Press” on Sunday that the White House had put forth “alternative facts” to ones reported by the news media about the size of Friday’s inauguration crowd.

To Trump saying about the inauguration crowd, “It looked honestly like a million and a half people, whatever it was, it was, but it went all the way back to the Washington Monument” — The New York Times said Trump’s crowd was “significantly smaller and less than the 1.5 million people he claimed”.

“Aerial photographs clearly show that the crowd did not stretch to the Washington Monument,” said NYT, adding “An expert hired by The Times found that Mr. Trump’s crowd on the National Mall was about a third of the size of Mr. Obama’s in 2009.”

Spicer also came in for criticism for stating on Sunday that: “This was the largest audience to ever witness an inauguration — period — both in person and around the globe”.

NYT made a point-by-point rebuttal of Trump’s claims on crowd size, TV viewership of the event, and also ridership on the Washington Metro System on Friday — as compared to the crowds that thronged during the 2009 and 2013 inauguration of Barack Obama as President.

Washington Post columnist Margaret Sullivan, in a piece titled ‘The traditional way of reporting on a president is dead. And Trump’s press secretary killed it’ – wrote caustically: “The presidency is not a reality show, but President Trump on his first full day in office made clear that he’s still obsessed with being what he once proudly called “a ratings machine.”

“He cares enough about it to send his press secretary, Sean Spicer, out to brazenly lie to the media in his first official briefing.”

Rebutting the new President’s claims on crowd size and other issues, she writes: “Trump wants a flat-out war with the nation’s media for one well-calculated reason: Because he believes it will continue to serve his political purposes, as it has for months.

“Journalists should respond by doing their jobs responsibly, fairly and fearlessly, in service of the public good.

“Somebody has to be the grown-up in the room. We’ve just been reminded of who it won’t be.’

The White House has launched an all-out war on the media, vowing to fight it “tooth and nail”.

Spicer’s assertion that “this was the largest audience to ever witness an inauguration – period” was lampooned on social media as well.

President Trump’s chief of staff also accused the media of attempting to “delegitimize” Trump on his first days in office and vowed to “fight back” against slanted coverage.

“I’m saying there is an obsession by the media to delegitimize this president, and we are not going to sit around and let it happen,” Reince Priebus said on Fox News Sunday.

Tensions flared anew when Kellyanne Conway, one of Trump’s top advisers, told CBC’s Chuck Todd on “Meet the Press” that Spicer had merely presented “alternative facts” about the inauguration. She also accused Todd of laughing at her and said he symbolizes how Trump has been treated by the media.

Kellyanne Conway has also said that the president would not be releasing his tax returns, reversing months of repeated campaign-trail promises to do so after an audit is completed.

Conway’s comments came in response to a Whitehouse.gov petition with more than 200,000 signatures calling on Trump to release his tax returns. Any petition on the site that receives 100,000 signatures in 30 days receives a response from the White House; this petition reached twice that in two days, said nbcnews.

“The White House response is that he’s not going to release his tax returns,” Conway said in an interview on ABC’s “This Week.”

In another development, President Trump faces a lawsuit accusing him of violating the US Constitution.

A group comprised of former White House ethics lawyers and constitutional law scholars are alleging that Trump has contravened the Emoluments Clause by accepting payments to his many businesses from foreign governments, reports the New York Times.

Citizens for Responsibility and Ethics in Washington, the group behind the legal effort, seeks to block Trump from receiving such payments to his businesses without Congressional approval.

Meanwhile, the new President reiterated that he will soon renegotiate the North American Free Trade Agreement (NAFTA) and discuss immigration when he meets the leaders of Canada and Mexico.

Trump in his campaign last year promised to renegotiate the 22-year-old trade deal and provide more favourable terms to the US.

The new President will meet his Mexican counterpart Enrique Pena Nieto on January 31. A meeting with Canadian Prime Minister Justin Trudeau is expected soon, according to the White House.

“We’re going to start some negotiations having to do with NAFTA,” Trump said.

Trump has termed the NFTA the worst trade deal in history and blames it for the losses of many manufacturing jobs in the United States.

Pena Nieto and Trudeau in a phone conversation on Sunday agreed to join forces to encourage economic integration in North America, according to a statement from the Mexican President’s office.

NAFTA, which took effect in 1994, created one of the world’s largest free trade zones by reducing or eliminating tariffs on most products.

The new leader told Netanyahu over phone that peace between Israel and Palestine can only be “directly” negotiated by the two parties, according to a White House statement.