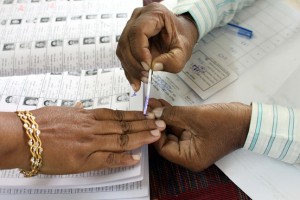 Washington, March 7 (IANS) The US media looks at India’s upcoming general elections as an “insanely huge and complex exercise” to “one of the most significant elections in decades” that will put “more power in the hands and thumbs of the Indian voter than ever before”.

Influential Time magazine described the elections as “the insanely huge and complex exercise”, noting that 814 million voters in the “world’s largest democracy will go to the polls” at 900,000 polling stations across the country.

“Voters will choose lawmakers from the incumbent Congress Party, which has led India’s ruling coalition since 2004, the main opposition Bharatiya Janata Party, the new anti corruption Aam Aadmi Party and a variety of small but powerful regional parties.”

The Wall Street Journal called the elections “juggernaut” as “one of the most significant elections in decades – a contest between a weakened secular left and a resurgent right with Hindu nationalist roots”.

“The battle for the electoral supremacy is an evolving process in India and this time, the added opportunity of social media reach and mobile Internet penetration means more power in the hands and thumbs of the Indian voter than ever before,” it said.

“Modi’s pledge to boost the economy by kick-starting manufacturing and making government cleaner and more efficient has struck a chord with an electorate angry with corruption scandals and flagging growth,” the Journal said.

In its view, “No party is likely to win a majority and a number of regional parties are expected to play important parts in forming the next government, but analysts say the elections mark a watershed for India’s two national parties.”

Writing in the New York Times, Manu Joseph, an Indian journalist and author of the novel “The Illicit Happiness of Other People”, said that as “India heads toward general elections”, its 814 million “voters are being influenced by mutated versions of India’s old fantasies”.

“What the elections are largely about this time is the rise of the fierce Hindu nationalist Narendra Modi… and the political responses to his ascent,” he wrote, referring to the Bharatiya Janata Party’s prime ministerial candidate.

Modi’s “charm in no small measure derives from the sense of danger he exudes from having been accused of complicity in the 2002 riots in Gujarat State that resulted in the deaths of more than a thousand people, mostly Muslims”, Joseph wrote.

“The noise on social media, which is largely in favour of Mr. Modi,” he suggested, “contains the low-stakes patriotism of Indian residents of the United States who do not have to live through the consequences of their long-distance affair with nationalism”.

“They tend to be liberal Democrats in the United States, but political conservatives in India,” Joseph suggested.