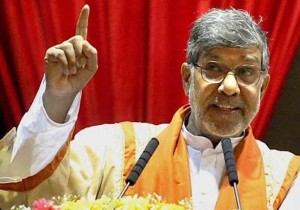 Washington, Oct 17 (IANS) In another recognition of his contribution in the field of child rights and abolition of child slavery, 2014 Nobel Peace Prize recipient Kailash Satyarthi has become the first Indian to be honored with Harvard University’s prestigious “2015 Humanitarian of the Year” award.

The child rights activist received the award during a ceremony organised at the Harvard University campus in Cambridge, Massachusetts, on Friday.

“I humbly accept the award on behalf of millions of left out children, for whose rights we strive to work for. Let us all pledge together to eradicate child slavery from the world,” Satyarthi said in his acceptance speech.

“We believe that your notable contributions to Indian child rights deserve special recognition,” wrote S Allen Counter Jr, director of the Harvard Foundation, to Satyarthi in the recognition letter.

The annual award is given to an individual whose work has served to improve the quality of life of people and inspired them to reach greater heights.

The crusader for child rights expressed the hope that he would “see the end of child labour” across the globe in his lifetime.

“I am positive that I would see the end of child labour around the world in my lifetime as the poorest of the poor have realised that education is a tool that can empower them,” Satyarthi had told IANS on the sidelines of a media interaction organised at the Foreign Correspondents’ Club last year.

“Hence, they are educating their children while the number of child labourers are gradually decreasing around the world,” Satyarthi added.

Quoting figures from the International Labour Organisation (ILO), he said the latest data has shown that the number of child labourers around the world is 168 million as compared to 260 million in the mid 90s.

Calling children his religion, Satyarthi said the issue of child labour has received a lot of attention after he won the Nobel prize but the momentum should be maintained.

“I never go to temples but when I see a child I see god in them. Children are my religion…This issue must not die. The children need a voice and they need everybody’s support especially the media,” he told IANS.

Satyarthi, along with Pakistan’s Malala Yousufzai, won the Nobel Peace Prize in 2014.

In January this year, Satyarthi met US president Barack Obama during his three-day visit to India to attend the annual Republic Day parade in Delhi.

He told Obama that he felt “tremendous moral pressure to work even harder than before” after winning the Nobel.

Satyarthi has worked for child rights for over 30 years through the Bachpan Bachao Andolan, an NGO which is credited with freeing over 80,000 children from bonded labour across India.

US court drops indictment against Khobragade