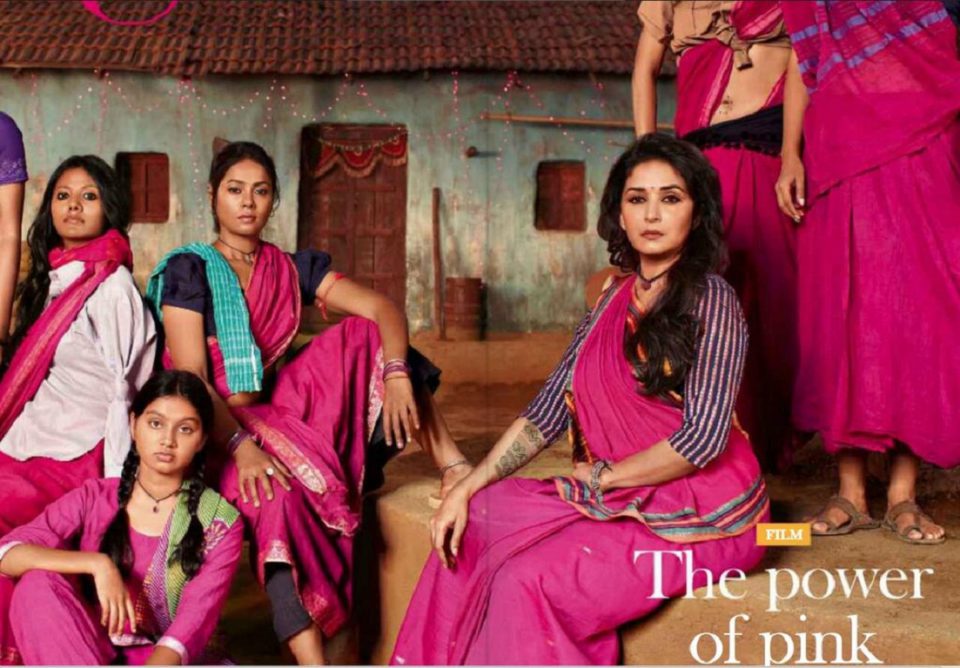 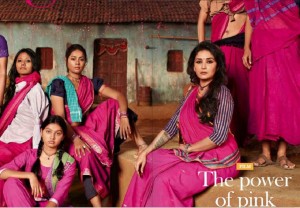 Women in pink sarees dot the lush rural landscape. They want revenge. Men, all raunchy paunchy rapists, leery bribe seekers and rowdy merry makers, get their comeuppance in the hands of these pink ladies armed with sickles, sticks, knives and gumption.

Director Soumik Sen’s film is designed as a flamboyant loud and message-driven film on women empowerment.In parts it looks like a government-sponsored documentary on rural development with Madhuri in it to ensure people care and respond to the message.

This would be as good as any place to reveal that the makers’ claims that the film is NOT based on Sampat Pal’s missionary zeal, is blatantly untrue. From the colour of the saree to the whole idea of making the male species look and feel really really saree..sorry, sorrry…Bro, this is Sampat’s kingdom all the way.

If you have any doubts on that score, check out Nishtha Jain’s excellent documentary Gulaabi Gang clevery released to preempt this imposter’s endeavour.

The problem is Madhuri Dixit hardly looks like the rural Mata Hari-Om. She tries hard. Oh boy! Does she try! The Yankee twang is put away firmly from public view and replaced by a sexy village tongue that rolls out stinging jibes at corrupt netas, male and female villains who enunciate cheesy lines with the lip-smacking relish of junior artistes in Prakash Jha’s trademark parables of rural oppression.

Trouble is, debutant director Soumik Sen’s vision lacks the socio-historical perspective of Jha’s cinema. Sen’s conscience bleeds all over the place. He seems to invest a great deal of idealism in his saga of girl power. But he forgets to apply brakes on his narrative so that very often the plot hurls forward in uncontrollable spasms of sarcastic stock-taking.

Scene after scene pitching the smug social reformer Rajjo (Madhuri) against the conniving politician Sumitra (Juhi) is piled on to the plot. The effort to make the battle look epic in scale is weighed down by the cornucopia of cliches that flows out of the writer’s pen liberally, as though the writer believes the corrupt can be vanquished simply by portraying them as cardboard cut-outs, like the ones that greet netas at public rallies.

Madhuri has her moments. Her face is definitely more mobile and emotive here than it was in her other recent release “Dedh Ishqiya” where she stood strangely sterile and detached in her redolent ambience. But her performance and demeanour are inconsistent. Some of the actresses in her girl gang like Tannishta Chatterjee, Priyanka Bose and Divya Jagdale are interesting in their enthusiasm to blend into the theme.

Juhi Chawla as Madhuri’s adversary chews on her lips furiously to appear evil, laughs fiendishly at any sign of disobedience among her minions and throws tantrums when an aging bureaucrat calls her by her first name. Juhi is interesting to watch in her diabolic avatar but a bit too eager to prove her point.

The same holds of the film. It has its heart in the right place. It portrays rural oppression of women with honesty. But the brutality is brittle and sometime laughable. The women in the Gulaabi gang are shown to often break into songs composed by the director and dances choreographed by Saroj Khan. They are more irritants than militant.

During these intermittent recreational breaks, the ladies look like unmoored avatars of Ketan Mehta’s beautiful gallery of rebellious women in “Mirch Masala”. The transition from pink to red is dreadfully self-conscious. The director assembles a series of striking visuals in the brutal rural landscape. But the characters never quire blend into the fabric of corruption.

The confrontations between Madhuri and Juhi are stymied by awkwardly worded verbal ‘jubalbandis’ which tell us these two women are on opposite of the wall of morality. But not much of their contrasting characters actually translates into an engaging drama. Characters are shown to be manipulated, insulted, poisoned and attacked. But their bearing never suggests any drama and conflict that would leave us with a deep impact.

Maybe the ladies of the pink brigade should have worn less chic blouses. Maybe their fingernails needed to look less manicured. Even the external detailing is haphazard, as though the director thought investing in a cause and a conscience were enough insurance against signs of wear and tear.

But sometimes caring is just not enough.