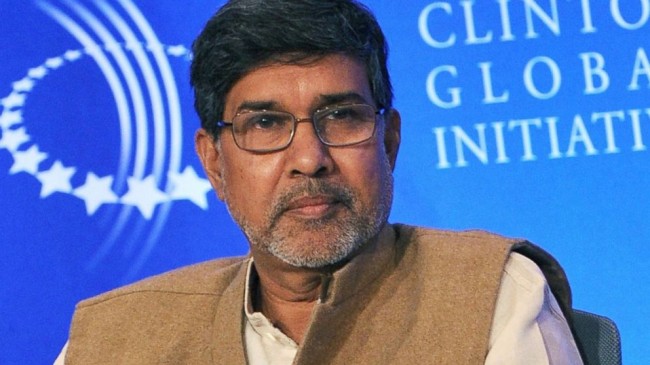 Washington, July 27 (IANS) Indian Nobel Peace Prize winner Kailash Satyarthi’s “relentless work” and “peaceful struggle” to keep children in school, rather than in the workforce, has been highlighted in a new US report.

“For more than four decades, Satyarthi has worked relentlessly for the rights of children and waged a peaceful struggle to keep children in school, rather than in the workforce,” said the US State Department’s Trafficking in Persons Report 2015.

“He has helped to free children trapped in bonded labor, assisted them with vocational training and education, and challenged public discourse in India on child labor and child trafficking,” it said.

“His contributions have not only affected India, but have also changed the world,” it said.

In 1998, he organised the Global March Against Child Labour, the world’s largest campaign against child labor that led to the adoption of ILO Convention 182 on the worst forms of child labor, the report noted.

The world was formally introduced to “Satyarthi and his work fighting child labor when he was awarded the Nobel Peace Prize in 2014, together with child activist Malala Yousafzai”, the report said.

But in 2007, the US State Department, it recalled, recognized Satyarthi’s contributions to the global fight against forced child labour by selecting him as one of 10 Trafficking in Persons Report Heroes.

Obama, the report recalled, said “… true measure of Kailash’s efforts is not a single prize he has been awarded, but the tens of thousands of people who today live with freedom and dignity thanks to his efforts”.

In 1980, Satyarthi founded Bachpan Bachao Andolan (Save the Childhood Movement), which has removed more than 80,000 children from exploitation.

Satyarthi also founded Good Weave in 1994, which now implements a certification scheme to ensure no child labour is used in the production of carpets in India, Nepal, and Afghanistan.