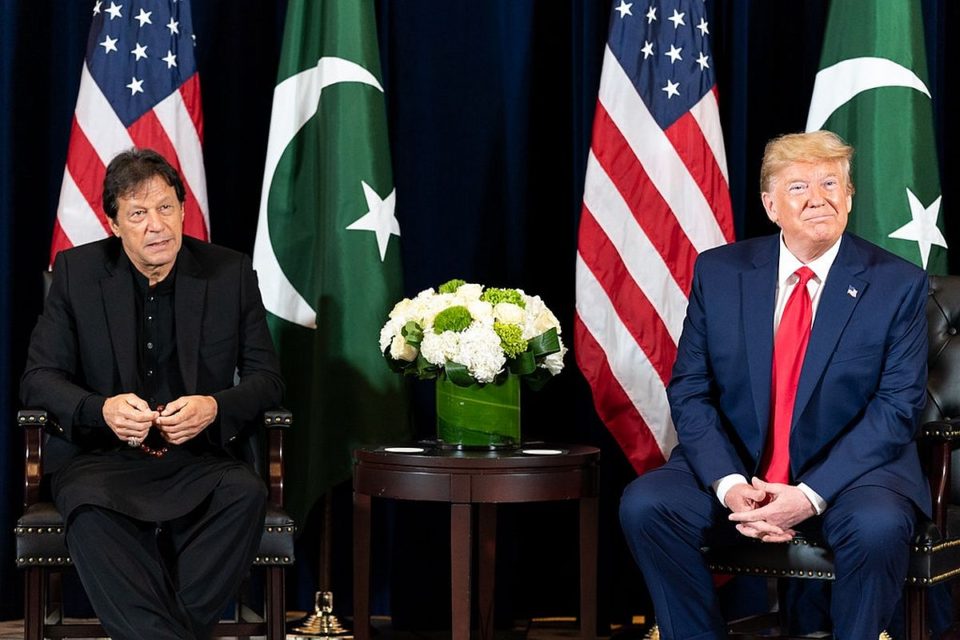 New York, Sep 24 (IANS) Mercurial US President Donald Trump has again inflamed a controversy over India and Pakistan just a day after participating in the Howdy Modi! rally with Prime Minister Narendra Modi by asserting that the Indian leader was “very aggressive” in his remarks about Pakistan there and that he had not expected him to make them.

Speaking to reporters before his meeting with Pakistan’s Prime Minister Imran Khan on Monday, Trump said: “I heard a very aggressive statement yesterday. I don’t have to say that. I was there. I didn’t know I was going to hear that statement, I had said.

“But I was sitting there and I heard a very aggressive statement yesterday from India, from the Prime Minister, and I will say it was very well received within the rule — you know, within in the room. The statement itself. That was a big room; there were 59,000 people.”

The remark was off the cuff and poorly phrased with a stumble over “rule” and “room”.

He repeated that it was a “very aggressive statement” and added, “I hope that they’re going to be able to come together — India and Pakistan — and do something that’s really smart and good for both.”

He said, “There is a meeting tomorrow (with Trump). Let us wait for it.”

Trump’s statement about Modi making “very aggressive statements” is puzzling because the remarks were about terrorism and Trump himself had talked about fighting terrorism.

In his speech at the Howdy Modi! rally, Trump had said to a standing ovation from the audience, “We are committed to protecting innocent civilians from the threat of radical Islamic terrorism.”

Modi had said that the same people who are bothered by India rescinding Kashmir’s special constitutional status under Article 370 were the same ones who “shield terrorism and nurture it.”

He did not name Pakistan, but added, “The whole world knows them very well. Their identity is in the sponsorship of terror and the world knows it.”

Trump, who again made pitch himself to be a mediator or arbitrator, said, “I’m sure there could be — there’s always a solution. And I really believe there’s a solution for that.”

He also made the claim that “India may come” around to him arbitrating on Kashmir.

But he made it a point of also saying that he could mediate only if both sides agreed to it.

India has refused to allow any third party involvement in disputes with Pakistan citing the 1972 Simla Agreement between the two nations that said they would resolve disputes bilaterally.

“And if at any time they say, you know, ‘We have some points we think you can maybe iron out’, I think I’d be an extremely good arbitrator,” he added.

This is the second time Trump found himself in a controversy over Kashmir. He made an off-the-cuff remark before a meeting with Khan at the White House in July that Modi had asked him to mediate or arbitrate the Kashmir issue.

India strongly denied that any such request had been made and administration officials concurred.

“If I can help I will always do that,” Trump said and that it will, however, depend on the two sides agreeing to it.

“I am ready willing and able,” he said.

Asked if he trusted Pakistan given its terrorism problem, Trump said, “I trust this gentleman right here and I do trust Pakistan.”

He added, “I have a lot of Pakistani friends in New York. Great negotiators by the way.”

Trump said that in dealing with terrorism “I’ve heard they made great progress.”

When Khan spoke of the problems his country has with Iran, Afghanistan and India, Trump said light-heartedly, “He lives in a very friendly neighbourhood.”

Khan said that he wanted to bring up the Kashmir problem in private with Trump.

He said, “It’s a humanitarian issue. If you were to meet him (Prime Minister Narendra Modi) now I would have asked to at least lift the siege.”

“I honestly feel that this crisis would get worse,” he added.

He said that as the “most powerful country” the US can do something at the Security Council to bring Indian and Pakistan together to discuss Kashmir and end what he described as a “the humanitarian suffering” in Kashmir.

In dealing with Afghanistan, Trump said “Khan has been very helpful.”

Trump had made an election promise to bring the troops home from Afghanistan and has been negotiating a peace deal with the Taliban.

He may need the help of the Taliban’s patron Pakistan to get the deal with the Taliban and is, therefore, trying to mollify him.

A diplomatic source, who follows Trump’s verbal somersaults, said that from his mangled prose it appeared that probably meant to say Modi was very “passionate” but instead said “aggressive”.

The diplomat also said that with Trump’s America it was more useful to look at the broader picture of India-US ties that are close and growing rather than trying to read into Trump’s every statement knowing that he has misspoken about various countries, including close allies.

At some point, India may agree to Kashmir mediation: Trump