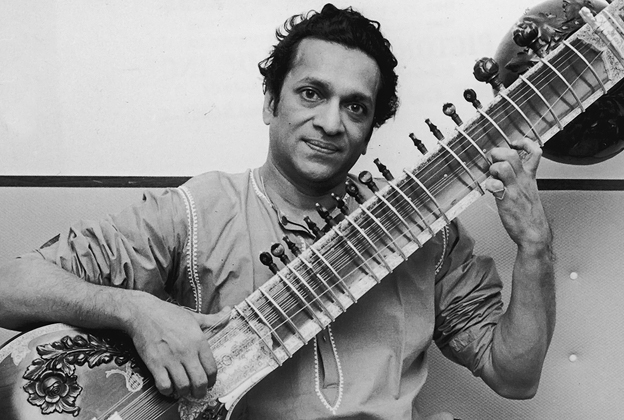 New Delhi, Sep 23 (IANS) SMM Ausaja, a film archivist and poster collector, has hit the goldmine in a local scrap shop of Mahim, Mumbai. He has discovered a tattered suitcase that belonged to Pandit Ravi Shankar and his son Shubho, which contains original musical notes, handwritten letters, rare photographs. old press clippings, autographed brochures, and even a poem written and signed by legendary filmmaker Ritwik Ghatak.

“I am film archivist and a poster collector and I keep going to places where this antique material or junk material is sold in the hope I might find something on cinema. I am a cinema archivist so when someone called me saying that there is material on Pandit Ravi Shankar,” Ausaja told IANS in a telephonic conversation.

“I was not really interested because he has done very few films. Still, I asked if there were any posters. They said there were photographs. I thought I’d get photographs of him composing for ‘Shatranj Ke Khiladi’ or maybe Gulzar’s ‘Meera’ or so many rare films he did,” Ausaja added.

He said that when he reached the scrap shop there was no material pertaining to cinema.

“There were perhaps one or two files with names of Bengali and Punjabi films written, and some notations. Then I realised these are actual notations written by him in the file. These are music notations in his handwriting. That was surprising. I thought it was precious and needs to be preserved,” Ausaja said.

He added that there were beautiful illustrations and signatures in Bengali as well as in English.

“There are a lot of brochures — some pertaining to his concert in Russia, so (these are) in Russian language. So in his own handwriting, (outlining) where it happened and on what date,” he said.

Some press clippings were found too.

“He went to Czechoslovakia, China and all those countries so (there are) press clipping in those languages which appeared on him. So there are two three files of the press clipping from 1954-’55,” he added.

“There are a lot of photographs. I found Annapurna Devi’s photographs, which is impossible to find now because she became a recluse and never got publicized anywhere,” he said.

A poem written on a Viennese hotel’s letterhead and signed by legendary filmmaker Ritwik Ghatak was also found in the suitcase.

“Another startling discovery in the whole suitcase was a handwritten poem by Ritwik Ghatak.. It has his signature,” he said.

Ravi Shankar was 92 when he succumbed to respiratory problems in 2012.