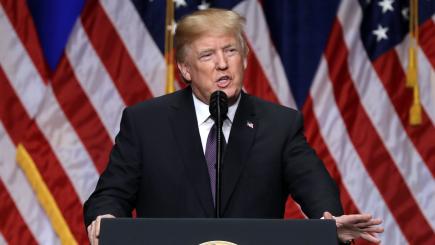 Washington, Jan 1 (IANS) President Donald Trump began the New Year on Monday with a stinging attack on long-standing ally Pakistan, saying it will get no more US aid as it was giving “safe haven to terrorists we hunt in Afghanistan”.

“The US has foolishly given Pakistan more than $33 billion in aid over the last 15 years, and they have given us nothing but lies and deceit, thinking of our leaders as fools,” Trump tweeted in his strongest denunciation of Islamabad.

“They give safe haven to the terrorists we hunt in Afghanistan, with little help. No more!” he added.

Trump’s announcement follows an increasingly tense back-and-forth between Washington and Islamabad after the US President unveiled his administration’s National Security Strategy.

He had then reminded Pakistan about its obligation towards helping the US because it got “massive payments” from Washington every year.

“We have made it clear to Pakistan that while we desire continued partnership, we must see decisive action against terrorist groups operating on their territory,” Trump had said. “They have to help.”

Pakistan is also accused by Afghanistan and India of harbouring terrorists ranged against the two countries. Islamabad routinely denies such charges.