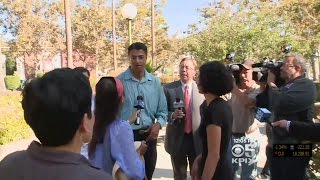 Washington, Sep 24 (IANS) A court in California has ordered the parents of a boy with autism and their neighbors into mediation, after a lawsuit was filed against the Indian couple alleging that their son was a “public nuisance”, a media report said.

A Santa Clara county judge handed down the order to defendants Vidyut Gopal, Parul Agrawal and complainants Kumaran Santhanam, his wife Bindu, as well as Robert and Marci Flowers in view of the negative precedent the case might set for families of children who have developmental disabilities, Eyewitness News reported on Wednesday.

“With great reluctance, we had to file this lawsuit because we had to protect the safety of all of the children in the neighborhood,” Santhanam was quoted as saying.

Last year, Gopal and Agrawal were slapped with a lawsuit by their next-door neighbours that claimed the couple did not do enough to prevent their autistic son from assaulting their children, as well as other people in their neighbourhood in Sunnyvale, one of the major cities that make up Silicon Valley.

“My hope is that when we meet with the defendants, that we can finally at long last come up with a workable solution for both parties,” said Robert Flowers.

Gopal is an engineer at a Silicon Valley company, while Agrawal is a research scientist at NASA Ames Research Centre.

Gas station owner charged for planning robbery at his own business