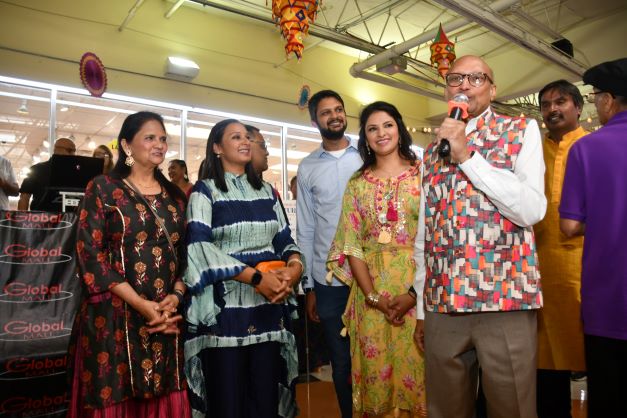 Atlanta, GA, October 21, 2022: Thousands thronged to the Global Mall in Norcross, GA to participate in the 21st Global Mela on a gorgeous fall weekend, October 8th & 9th, 2022 and to kick off the festival season. After two and half years of being on a stressful physical and emotional COVID-19 roller coaster, the South Asian community rejoiced for being able to gather in-person again for Atlanta’s largest South Asian shopping and family-friendly festival. With a crowd of over 20,000 in attendance over 2 days, Global Mela has been coined by few as the “Black Friday for South Asian Shopping”.

This was Global Mall’s 21st year hosting Global Mela. Although the Mela has grown 20 times since the first Mela, some things haven’t changed. Global Mall visionary, founder and community leader, Shiv Aggarwal, described the concept behind Global Mall and Global Mela in a few words “ the idea is to unite the community and create a feeling of oneness allowing people in the community to shop, eat, attend events, and gather with friends under one roof while celebrating our rich South Asian culture”. The concept he had 21 years ago was true then, and still holds true today. For tenants and vendors alike, Global Mela has become very dear and personal to them. Speaking on the event, Hayal Bhatt, the owner of Ladlee, stated “ [Mela] is one the events that we look most forward to in the year. The organizers go over and beyond to make it fun for all ages. It is a time we get to show what we represent in terms of quality and offer a great value, which results in a great turnout for us!”

Global Mall tenants, vendors, and attendees alike were excited to take part in this year’s Global Mela offering the largest sales of the year. Global Mall’s 25+ retail tenants and 2 salons, along with 40 temporary vendors took part in the Mela offering phenomenal sales in clothing, jewelry and accessories. Attendees and loyal customers started lining up for Ladlee’s Annual Sale 2 hours before doors opened and crowds rushed in to snag the best deals. This year, retailers opened their doors earlier than the 11am start time to accommodate the shoppers arriving as early as 9:30am to get early access to the deals.

The weekend opened up with a Lamp Lighting Ceremony performed by Pundit Ved Joshi with a few chief guests including the Mayor of Norcross, Mr. Craig Newton; Honorable Consul General of India, Dr. Swati Kulkarni; Honorable Union Minister of State for External Affairs and Parliamentary Affairs of India, Shri Vellamvelly Muraleedharan; Candidate for State House, Narender Reddy; Honorable Judge, Neera Bahl, Vasudev Patel, Kartik Bhatt,Bob Erramilli, and media representatives. Mr. Shiv Aggarwal, started off the event thanking the community for their 21 years of support and helping build Global Mall to the height it has reached. “ I feel proud to say that we are celebrating the 21st Global Mela and the 21st anniversary on the Mall. When we bought the Global Mall, it was an almost empty building by my family and I worked very hard to make it the first premier South Asian mall in North America.” He also thanked the Media, Global Mall tenants, and vendors for their continued support, along with the Global Mela organizers – Lynn Rich, Aarti Aggarwal, Doc McAlpine for their hard work in putting together another amazing year.

After the performances, Mr. Aggarwal praised Dr. Swati Kulkarni as one of the most energetic and charismatic Consul Generals. She has played an outstanding role in forging unity, not only among the Indian community here but also between the Indian diaspora in the US with the global diaspora.

Dr.Kulkarni said she and the Atlanta community were honored and excited to welcome Hon. Muraleedharan because it was  almost four years since an India’s high-ranking officer had visited Atlanta. She then gave a brief introduction of Kerala born Shri Muraleedharan, current Union Minister of State for External Affairs & Parliamentary Affairs of India since from 30 May 2019. He was the eighth State President of Bharatiya Janata Party (BJP) in Kerala. He is also a Member of Parliament in the Rajya Sabha, the upper house of the Indian Parliament representing the state of Maharashtra. He is a graduate in English literature and language from Brennen College in Thalassery.Shri Muraleedharan is married to Smt. Dr. K.S. Jayasree.

Hon. Muraleedharan said he was thrilled to see so many South Asians in one building for this festival – “When I came here and saw this event, I was wondering if I am in a mini Bharat. I feel proud you have created a little India in this part of the world. I would like to congratulate you all for that. Currently we have a series of festivals; we have Nav ratri, Gokul Ashtami, Ganesh Utsav; Dussehra, and soon we will be celebrating  Diwali. Fstivals connects people; festivals reinvigorates people; recreates purpose of life, recreates vision of life. That is the objective of this event. I love Ganesh Utsav of Maharashtra. Originally it was celebrated in homes. Public celebration on a massive scale (Sarvajanik Ganesh Utsav) was initiated by freedom fighter and social reformer Lokmanya Tilak ji.in 1893, which later helped India in its freedom struggle and in gaining independence. Here you have attended in large numbers, which shows to the whole world that you are strong and united. United IIndia is the solution for the whole world. He concluded by wishing Happy Global mela and Diwali to all.

Hon. Muraleedharan then draped a shawl on Atlanta’s veteran and prolific freelance journalist Mahadev Desai. Shiv Aggarwal read the inscription on the Plaque: “Presented with appreciation to Sri Mahadev Desai; Journalist-at large; For his homage to truth by sharing news and information with Indian Americans and Mainstream audiences accurately and objectively through his journalistic and media skills firmly rooted in modesty and knowledge of Indian Cultural and Traditional Values.”

Throughout the two days, cultural performances enthralled the attendees with Bollywood beats and DJ Bobby from XtraHotDJs kept the crowds dancing and pumped all weekend. There were a variety of performances by dance schools, individual performers, and musical groups. It has always been important for the Global Mall Family to give young performers a platform to showcase their talent. This year, dance participants of the cultural program included a new dance school Steps and Styles, The Amazing Kids, Ashna Joshi, and Global Mall’s two resident dance schools Nitya Natya Kala Bharti and Prem Dance Academy. Performances also included 2 musical sets by Manisha and Anand Mehta and Gaudiya Vaishnava Association.

Children spent the weekend jumping in the inflatable bounce houses and enjoying the inflatable rides set up outside the mall and were treated to food and fun inside with free popcorn, cotton candy, and face painting provided by Global Mall. Additionally, the 3pm magic show captured the attention of over 150 kids over both days with free party favor bags and  kid’s-only raffle prizes after the show!

Global Mall has outdone itself once again with record attendance, more vendors, more free prizes and even bigger sales! The event continues to grow with the support of the community at large.