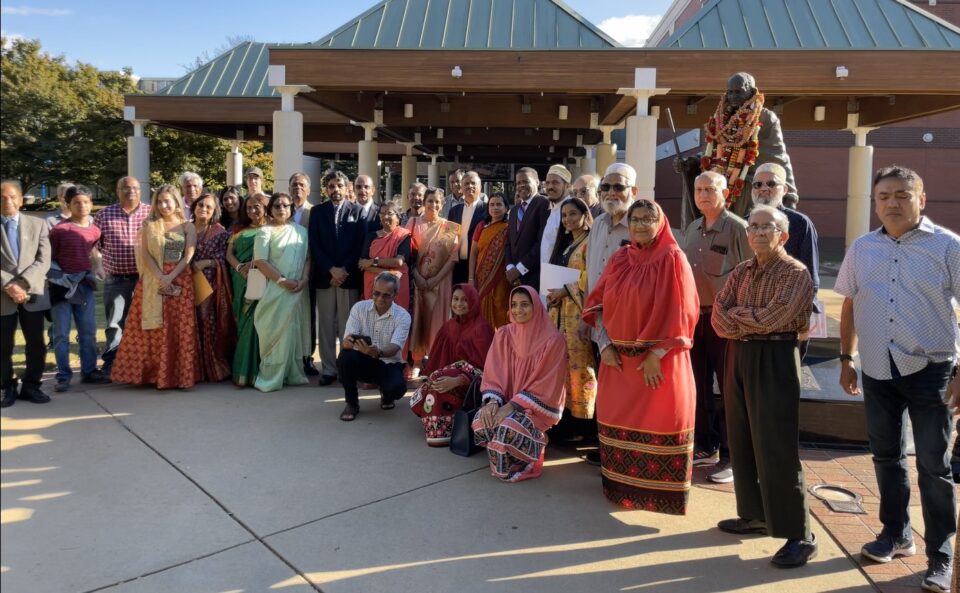 The name of Mahatma Gandhi transcends the bounds of race, religion and nation-states, and has emerged as the prophetic voice of the twenty-first century. The world remembers Gandhi not just for his passionate adherence to the practice of non-violence and supreme humanism, but as the benchmark against which we test men and women in public life, political ideas and government policies, and the hopes and wishes of our shared planet.

The International Day of Non-Violence is observed worldwide on 2nd October every year, the birthday of Gandhi. According to the General Assembly resolution of June 2007, which established the commemoration, the day is an occasion to “disseminate the message of non-violence, including through education and public awareness”. The resolution reaffirms “the universal relevance of the principle of non-violence” and the desire “to secure a culture of peace, tolerance, understanding and non-violence”.

Dr. Martin Luther King Jr.’s nephew and former president of King Center, Isaac Farris and Consul General of India in Atlanta, Dr. Swati Kulkarni, who were chief guests on the occasion, first garlanded a life-size bronze statue of Gandhiji in the presence of the community. Then official from national park service, Consul Rajeeb Bhattacharya and other community leaders paid floral tributes to Gandhi Ji.

Dr. Martin Luther King Jr.’s nephew and former president of King center Isaac Farris gave a brief background about the vision of his aunt Coretta Scott King having the presence of Mahatma at the entrance of King’s historical District. Farris said that we have a sense of pride. Technically, first thing you walk into the King center, you see Mahatma Gandhi.  The Statue is proving to be a big magnet as more than a million visitors come to the King Historic site annually to marvel and pay homage to the invaluable bond between MLK Jr. and the Mahatma.

“All these milestones, we are celebrating on a very important land mark, King Center,” she said. “We have completed 75 years of India’s independence on the August 15th 2022. We celebrated Azadi ka Amrit Mahotsav in a very majestic and glorious way. Yet another mile stone is 75 years of US and India partnership. Dr. Kulkarni said these are globally relevant ideals and they inspired many millions. The operational technics we know nonviolence, truth, tolerance and satyagraha. They influence so many, Dr. King, Nelson Mandela and also President Barak Obama and so many others like us.”

“We appreciate very much the honor the Indian American community received from Georgia at the huge function 37th annual tribute to Dr. MLK at Capital of Georgia that was held in January 2022. Quoting the recent UN, discussion on non-violence, education which was held in New York marking the 2022 International Day of Nonviolence,” Dr. Kulkarni said. “Bernice King attended the seminar that was organized by India’s Permanent Mission to the UN and UNESCO Mahatma Gandhi Institute of Education for Peace and Sustainable Development at the UN headquarters to commemorate the International Day of Non-Violence. The panel discussion was very well received and Bernice King spoke very well. She added that all these connections which we have with King center, we cherish and very special for our India, Indian American community, GFUSA and everyone.”

Dr. Swati concluded her address saying: “Let us rededicate ourselves to these noble ideals of Gandhi and those added to Dr. King and those and they went along and followed those teachings. Let us reflect on these this day and make sure that we strive and endeavor to build tomorrow which will be more peaceful, truthful, more tolerant and better world to all of us.”

Earlier, Anthony Thaliath, Executive Director of GFUSA, opened the proceedings with a welcome address followed by Subash Razdan, Chairman of GFUSA recognizing volunteers of Gandhi foundation and staff of Consulate and presenting certificates of appreciation to those who volunteered at the India booth at the recently held King Center’s international community expo.

Sreedevi Ranjit, the Artistic Director of the Laasya School of Performing Arts was also felicitated by Hon. Isaac Newton Farris Jr, for her contribution to promoting the Indian classical artforms in the United States. An award of recognition of appreciation with a Shawl conferred on a well-known veteran journalist of Atlanta Mahadev Desai by an Indian based organization ‘Rushi Peetham’, Dharmika, Praja Bandhuvulu and other Atlanta community organizations was also presented on the occasion. While presenting the plaque and shawl, Subash Razdan, Chairman of GFUSA said that Mahadev Desai is with GFUSA since the day one. He is a prolific writer and done amazing coverages. Hardly any ambassador who has not covered or interviewed by him here whenever they visit Atlanta.

Mohsin Bharmal, Treasurer of USA made concluding remarks. Namrata Sharma from India presented two beautiful paintings, one with Gandhiji to GFUSA and another to the chief guest Isaac Farris.

Later, at the Gandhi statue, CGI Dr. Swati Kulkarni led the gathering in a Peace March to the King Crypts and laid wreaths at the Crypts of Dr. King and his wife Mrs. Coretta Scott King, across the Memorial of the Eternal Flame that symbolizes Dr. King’s commitment to eternal hope and truth.

Historic Site is significant and important because it is the first time that the U S Department of the Interior, which administers the National Park Service and historic sites, has permitted such a memorial (mahatma Gandhi statue) on Federal lands. The National Federation of Indian American Associations (NFIA, with the support of the Embassy of India, the Government of India, the City of Atlanta, the State of Georgia, the King Center, and the Georgia Human Relations Commission, along with a number of Indian-American, Asian-American, African-American and other mainstream community organizations all came together in harmony and enthusiasm for this memorial to fructify. The dream became a reality with the installation and dedication of the statue of the Mahatma on the cold and windy morning of January 24, 1998 by the Honorable Andrew Young.

Sri V. Muraleedharan, Minister of state for external affairs & parliamentary affairs who was on a two-day visit to Atlanta visited Gandhi statue in King Center and paid rich floral tributes to Gandhiji. Later he led the congregation in a Peace March to the King Crypts and laid wreaths at the Crypts of Dr. King and his wife Mrs. Coretta Scott King. At the crypt wreath ceremony, External affairs minister was accompanied by CGI Atlanta Dr. Swati Kulkarni, Isaac Farris, nephew of Dr. King, Barbara Harrison, Director of International affairs, King Center and Subash Razdan, chairman of GFUSA.  The minister also visited Gandhi room, King room in the freedom hall, Ebenezer B church and Dr. King birth home. The minister enthusiastically examined all exhibits. The minister attended many programs and met Atlanta Indian American community organized by Atlanta Indian consulate besides addressing audience in Global Mela in his two-day tour to Atlanta from October 8-10.