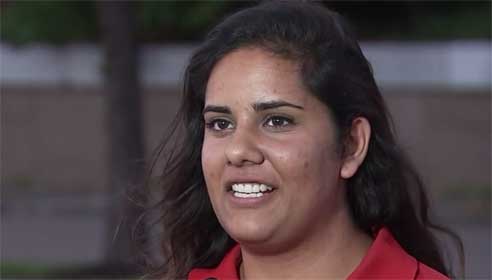 New York, Aug 12 (IANS) An Indian American leader of a student union is at the centre of freedom of expression debate after the union took action against her for a Facebook comment in support of police personnel who had been shot dead by an anti-police activist.

The vice president of the University of Houston students union, Rohini Sethi, had written: “Forget Black Lives Matter; more like All Lives Matter.”

This came when five police officers were shot dead in Dallas, Texas, after a rally organised by the Black Lives movement to protest against police killings of African Americans in July.

After criticism for what was seen as punishing her for expressing her views, union president Shane Smith backed down last week in a compromise that also had her apologize.

Universities have come under criticism for muzzling free expression of views guaranteed by the constitution due to student protests.

Earlier, amid protests from the Black Students Union and some activists, Smith suspended her from her position as punishment for writing the post and ordered her to attend three cultural events each month, take part in mandatory diversity training and write a letter reflecting on her Facebook post.

The action against her was taken despite Sethi apologising for her post.

The Black Lives Matter movement protesting police atrocities against African Americans has emerged as a strong nation-wide force organising ralies and protests. It has wide support on university campuses. Its supporters object to anyone saying “All lives matter.”

“Saying ‘all lives matter’ is deemed offensive to some African-American groups who have adopted the catch phrase ‘Black lives matter,’” Fox News reported.

“The standard has flummoxed many in the national debate, who believe saying that all lives matter is as innocuous as it is true.”

Even the Democratic Party presidential candidate Hillary Clinton came under attack for saying that one of the lessons she learnt from her mother was that “all lives matter”.

As the controversy built up, university authorities distanced themselves from the Student Government Association (SGA) as the union is formally known.

“The University of Houston continues to stand firm in support of free speech and does not discipline students for exercising their Constitutional rights,” it said in a statement.

“Actions by SGA, a registered student organization subject to its own governance, are not University actions and do not affect the academic or university standing of a student.”

Last week, both sides announced the compromise lifting the suspension after she agreed to take leave from the position till the start of the next semester and expressed regret for her post.

“I may have the right to post what I did, but I still should not have. My words at the time didn’t accurately convey my feeling and cause many students to lose their faith in me to advocate for them. I will always continue to learn and be ready to discuss these issues.”

Smith expressed regret for taking action against her and said: “For those who were upset due to what they considered a violation of the first amendment (right to free speech in the US constitution), that was never my intention and I apologize for that impression.”

An African American ex-serviceman who had served in Afghanistan, Micah Xavier Johnson, shot dead five police officers and wounded six others in Dallas in July during a systematic attack that he had claimed was in retaliation for police killing black people.

The previous days police had shot dead an African American man in Minnesota and another in Louisiana. Johnson was killed by police robot.