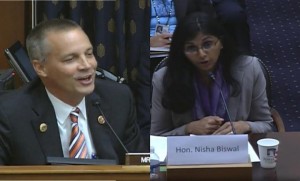 Washington, July 26 (IANS) In an extremely awkward incident, a newly elected member of the US House of Representatives mistook two senior Indian American officials of the Barack Obama administration to be from India and asked them questions about “your country” and “your government”.

“Anything I can do to make the relationship with India better, I’m willing and enthusiastic about doing so,” he continued amid looks of confusion among State Department and Congressional staff attending the hearing.

Clawson, apparently confused by their Indian surnames and skin tone also asked Biswal and Arun Kumar if the Indian government could loosen restrictions on US capital investments in the country.

“Just as your capital is welcome here to produce good-paying jobs in the US, I’d like our capital to be welcome there,” he said.

“I ask cooperation and commitment and priority from your government in so doing. Can I have that?”

“I think your question is to the Indian government,” Biswal responded.

“We certainly share your sentiment, and we certainly will advocate that on behalf of the US.”

According to the report, it is extremely uncommon for foreign officials to testify before Congress under oath.

“Even so, it’s unclear if at any point Clawson realised his mistake, despite the existence of a witness list distributed to the various members detailing Biswal and Kumar’s positions,” the Foreign Policy report said.

Clawson, who won a special election last month to fill the seat of Trey Radel, who had resigned after being convicted for cocaine possession, repeatedly touted his deep knowledge of the Indian subcontinent and his favourite Bollywood movies.

It was Clawson’s first day sitting on the subcommittee on Asia and the Pacific.

He was named to the full committee July 9 and Steve Chabot, subcommittee Chairman and Republican member from Ohio, spoke about Clawson’s deep international business acumen and knowledge of four languages in welcoming him.

“Our newest member of this committee, Curt Clawson speaks four languages and all kinds of other great stuff,” Chabot said.

Following Clawson’s opening statement, Eliot Engel, the full panel’s ranking Democrat, pointed out that Biswal and Arun Kumar work for the US government.

“Thank you both for your service to our country, it’s very much appreciated,” New York’s Engel said.

An update in the Foreign Policy report said: “While Clawson’s office did not respond to a request for comment, the Congressman apologised in a statement to USA Today later Friday.

“I made a mistake in speaking before being fully briefed and I apologise. I’m a quick study, but in this case I shot an air ball,” he said.