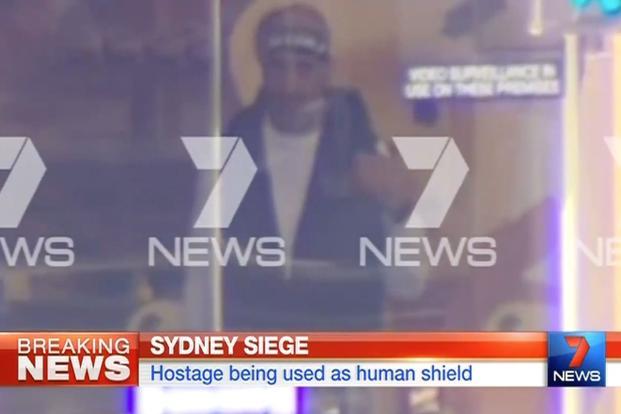 Sydney/New Delhi, Dec 15 (IANS) An Indian employee of Infosys Technologies was among over 30 people held hostage Monday by an armed man who stormed a cafe in Sydney’s bustling business district, not far from the landmark Opera House.

Indian Prime Minister Narendra Modi was among the first world leaders to condemn the attack. His Australian counterpart Tony Abbott appealed for calm as a stunned world saw it unfold in a country that has been largely unscarred by terrorism.

The dramatic siege, days ahead of Christmas, took place in Sydney’s central business district and barely 400 metres from the Indian consulate, which was promptly evacuated.

The anxious hostages were seen standing with their hands raised at the expansive French windows of the Lindt Chocolate Cafe in Martin Place. A black and white flag, believed to be a jihadi flag, was held up in a window.

Security forces were quick to respond. They took up positions soon after the gunman struck at 9.40 a.m. (4.10 a.m. IST)

Vinod Bahade, the deputy consul general in Sydney, told IANS over telephone: “Minutes after we got to know that some people at a nearby cafe have been taken hostage by a gunman, the Indian consulate was evacuated.

“However, we have not shut it and the work will resume once the problem is solved.” The Australian authorities provided constant updates.

Surinder Datta, the deputy high commissioner at the Indian High Commission at Canberra, told IANS that the incident was being constantly monitored.

“We are taking reports from the Indian consulate in Sydney. This is a very critical issue and we do not want to take any decision in hurry,” Datta told IANS over telephone.

Andrew Scipione, a senior police official, said police forces had moved to a “footing” — similar to dealing with a terrorist attack.

Five hostages managed to flee, and their desperate dash to freedom was caught live on camera.

Infosys said it was in touch with authorities in Sydney and the Indian consulate about the well being of its employees in Sydney.

“We can confirm that one Infosys employee is among the hostages at the Lindt Cafe in Sydney. We are in the process of confirming the whereabouts of all our other employees in the city,” the company said.

The armed man demanded that he be provided an Islamic State (IS) flag and said he wanted to talk to Prime Minister Abbott. Possession of the IS flag is illegal in Australia.

Abbott described it a “deeply concerning incident, but all Australians should be reassured that our law enforcement and security agencies are well trained and equipped and are responding in a thorough and professional manner”.

In New Delhi, Prime Minister Modi described the incident as “disturbing”. “Such acts are inhuman and deeply unfortunate. I pray for everyone’s safety.”

The hostage taker – about whom little is known – claimed he had planted bombs in the cafe and at different locations in the city.

The three men and two women who escaped from the cafe said the man forced his captives to call him “brother” and promised to release a hostage if the IS flag was delivered.

Nearby streets were cordoned off. Train services were shut down nearby.

The police also evacuated the Sydney Opera House and shut down traffic on the Sydney Harbour Bridge.

The area where the gunman struck is close to where a number of consulates, including that of India, are located.

According to informed sources, she spoke to Indian High Commissioner Biren Nanda about the unfolding drama.