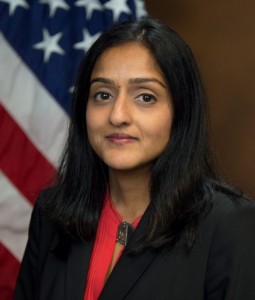 New York, Aug 12 (IANS) An Indian American official spearheading the Obama administration’s campaign against police brutality and mistreatment of minorities has issued a scathing indictment of the city of Baltimore, accusing its police force of violating the Constitution and federal anti-discrimination laws.

The head of the federal Civil Rights Division, Vanita Gupta, who oversaw an inquiry into police brutality and excesses in the city, said on Tuesday that its African American community “bore the brunt”.

Speaking at a news conference to release a Department of Justice report from the inquiry, she said her agency had entered into an agreement with Baltimore to reform the police.

Gupta, who is also the Principal Deputy Assistant Attorney General, is the most prominent of several Indian Americans working in the civil liberties arena.

The federal inquiry was launched after riots broke out in Baltimore last year during protests against the death of an African American man, Freddie Gray, while in police custody.

All the six police officers charged in the case were either acquitted or had the charges withdrawn leading to outrage among African Americans and civil liberties activists.

The Baltimore incident came after the police shooting of an unarmed teenager in Ferguson, Missouri, the previous year sparked massive riots and turned national attention to police killings of African Americans.

Several such incidents gave an impetus to the nationwide Black Live Matter movement against alleged police atrocities on African Americans.

While the US government routinely accuses other nations of human rights violations and brutality against minorities, the Baltimore report and Gupta’s actions against several cities turn a rare government spotlight on what goes on within the US.

Gupta said the inquiry found that 44 per cent of the people stopped by police in Baltimore were in two small African American neighbourhoods that had only 11 per cent of the city’s population.

The report released by her said that complaints of misconduct were not properly investigated or followed up by officials and were often covered up. Besides improper use of violence, the report said police coerced sex from people.

Gupta has been working to reform police across the country amid growing protests against discrimination. Among the cities she has taken on are Chicago, Cleveland and Newark, New Jersey.

In May, she filed a case against the state of North Carolina which passed a law requiring people to use the public bathrooms according to their sex. Gupta said the law discriminates against transgender people because they cannot use the bathrooms of the sex they identify with.

Gupta shot to fame when straight out of New York University Law School she exposed police corruption and discrimination in Tulia in Texas. In 2003 she won the release of 40 African Americans and six others falsely convicted on drug charges.

She was then working for the Legal Defence and Education Fund of the National Association for the Advancement of Coloured people.

Before joining the federal government, she was the Deputy Legal Director of the American Civil Liberties Union.