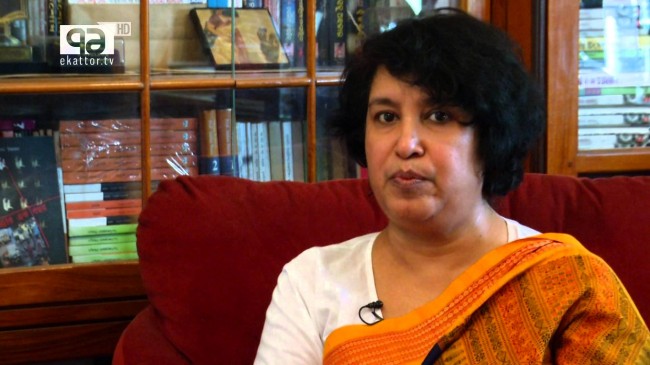 Washington, June 2 (IANS) A New York-based think tank has relocated controversial Bangladeshi writer Taslima Nasreen to “safety” in the US amid death threats from Islamist radicals, according to a press release.

The Center for Inquiry assisted in relocating the award-winning writer and human rights activist to the US last week after she was “specifically named as an imminent target by the same extremists responsible for the murders of Avijit Roy, Washiqur Rahman, and Ananta Bijoy Das”, the NGO said on Monday.

“The battle between science and religion is perennial. Scientists don’t hack people who refuse to believe their theories, but fundamentalists do,” Nasreen wrote in a blog post on May 30.

“The politics of religious sentiments has taken a violent turn. The solution for this is not to protect religious sentiments. Rather, the opposite. It must be attacked constantly. Even more so than before. This is how people will eventually learn how to deal with it.

“Otherwise, the people in the business of religion will destroy what is left of society,” she added.

“Another freethinker writer-blogger was hacked to death in Bangladesh this morning. Bangladesh is worse than Pakistan,” she tweeted following the brutal murder of blogger Ananta Bijoy Das on May 12.

But someone with the Twitter identity oneofthemuslims @jihadforkhilafa wrote back: “@taslimanasreen u r also among the 84 who r on the hitlist. count ur days.”

The tweet was referring to a list submitted to Bangladesh’s interior ministry in 2013 by a radical group asking for the writer-bloggers to be punished for their blasphemous comments.

The Center for Inquiry said that it “has established an emergency fund to assist freethought activists whose lives are under threat by Islamic radicals linked to Al Qaeda in countries such as Bangladesh”.

The NGO said that Nasreen has lived in India since 2004, “but even there she has faced persecution and threats”.

“While it is truly up to the authorities of countries like Bangladesh and others to rein in this threat, we’re going to do our part to keep these people safe,” said Michael De Dora, CFI’s’representative to the UN.

Indian charged with visa fraud on arrival at JFK