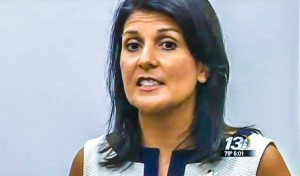 Washington, June 23 (IANS) One hundred and fifty years after the end of the American civil war, South Carolina’s Indian-American governor Nikki Haley finally added her powerful voice to growing demands for removing the rebel Confederate flag from the State Capitol.

Public pressure to remove the red flag with a blue diagonal cross with 13 white stars representing the secessionist states breaking away from the American Union over the issue of slavery peaked after the horrific massacre in a historic black church in Charleston last week.

Hundreds marched in South Carolina over the weekend seeking removal of the Confederate flag from its perch after Dylan Roof. The 21-year-old white man who allegedly came to the church “to shoot black people” and “start a race war”, was seen in photographs with a gun waving the flag.

“Today we are here in a moment of unity in our state without ill will to say it is time to remove the flag from our capitol grounds,” said Haley, daughter of Sikh immigrant parents from India and the state’s first non-white governor.

“This flag, while an integral part of our past, does not represent the future of our great state,” said the two-term chief executive of the state that had led the way out of the Union on December 20, 1860, six weeks after the election of Abraham Lincoln as president.

By March 1861, emboldened by South Carolina’s example, six more states — Mississippi, Florida, Alabama, Georgia, Louisiana, and Texas – also seceded to form the Confederate States of America or the Confederacy. The flag once flew atop the State Capitol, but by a 2000 compromise it was moved to its location in front of the state legislature.The flag can only be removed from there with the approval of two-thirds of the General Assembly.

Haley said if the legislature doesn’t convene on the matter in this last week of the legislative year, she would call up lawmakers to the capital “under extraordinary measures.”

President Barack Obama, who will travel to Charleston Friday to deliver the eulogy for one of the victims, Clementa Pinckney, the church’s pastor and a state senator, has said the flag should be removed and placed in a museum.

South Carolina’s two Republican senators Lindsey Graham and Tim Scott, were also alongside Haley at the announcement. Though they did not speak there, they both backed the governor’s call. Graham, who is seeking the Republican presidential nomination, said in a statement that “after the tragic, hate-filled shooting in Charleston, it is only appropriate that we deal once and for all with the issue of the flag.”

The Republican House speaker of Mississippi also unexpectedly declared in a statement Monday night that the Mississippi state flag, which includes the Confederate banner, “has become a point of offense that needs to be removed.”

Most Republican presidential candidates had earlier hesitated to weigh in on the flag issue as South Carolina is an early and crucial primary state. But Haley’s decision helped them cut their tacit support of the Confederate flag.

Walmart, the country’s largest retailer, announced that it would remove items bearing the Confederate flag from its stores and stop selling them online. Sears Holdings made a similar announcement.

Calling the Confederate flag a “Symbol of Hatred”, the New York Times said Haley had “acted in the interest of her state and the nation” with her call to remove the flag from the State Capitol grounds.

Saying “the Confederate battle flag is not worthy of respect”, the Washington Post said the “symbol of secession and opposition to civil rights should be removed.”

Facebook can spot you even if your face is covered