A foremost speaker of Bakthi Yoga and preacher of Vedic scriptures, Shrila Maharaj is well known for speaking the hard truth. His mission is to convey the natural meaning of the scriptures, giving us an authentic rendition of the Vedic conclusions on important topics such as the purpose of human life, the nature of the soul, God consciousness and Bakthi yoga. A distinguished Vedic scholar and author of many classic books, Shrila Maharaj has been invited to many leading Universities and Colleges around the world for his authority, depth and clarity in the ancient Vedic scriptures. 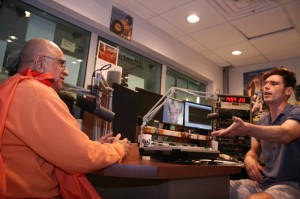 Georgia State University’s (GSU) Public Affairs Radio Station known as WRAS Atlanta 88.5 FM, had invited Shrila Maharaj on the 18th of April to speak about the rich Indian Vedic wisdom and Krishna Consciousness in particular to the students. The News Director, Mr. Nathan Klim interviewed Shrila Maharaj and this was broadcast both over the air as well as on the internet as part of “The Hub” program. In answering to his questions, Shrila Maharaj said that Gaudiya Vaishnavas belong to the Monotheistic sect of Hinduism (Vaishnavism) following the age old Vedas and believe in the personal form of God. Quoting on the similarities and main differences between Christianity and Vaishnavism (as both sects believe in God as a person) he clarified that the former considers only human beings possess soul whereas the later believes all living beings including animals, birds, plants and insects also have spirit soul. Shrila Maharaj also rejected the Darwin’s theory of evolution as it is from the biological aspect i.e., one species evolves into another species. Actually the consciousness is evolving and consciousness is the quality of the spirit soul. Shrila Maharaj highlighted the main teachings of the Vedas that we are all spirit souls and not the body. We are part and parcel of the Supreme spirit soul and only in the human form of life God has given us the highly evolved consciousness, to realize Him. To a question about faith and religion Shrila Maharaj explained the difference that faith is based on body whereas religion belongs to the soul. Religion is service to God and though you were born in a particular faith you can change your faith anytime in your life but you cannot change your religion. Talking about spirituality in India, Shrila Maharaj said it is sad that India is becoming more materially opulent and at the same time is spiritually degrading. Mr. Klim was very appreciative of Shrila Maharaj’s explanations on the different areas of spirituality and his vast knowledge of the Vedic scriptures. Later in the evening, hundreds of students personally received the Bhagavat Vani magazine from Shrila Maharaj, which is produced by Gaudiya Vaishnava Association yearly. The GSU student community enthusiastically accepted the magazine and had photos taken with Shrila Maharaj. 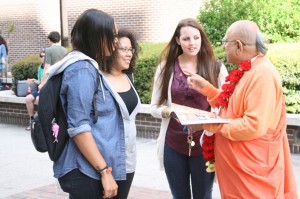 On Apr. 27th Shrila Maharaj was invited to the University of Georgia (UGA) at Athens to Speak on “Body, Mind and Soul” by Indian Student Association and Indian Association of Greater Athens. Shrila Maharaj opened his speech by appreciating the crowd present for their interest in spiritual talks. He said that these days nobody is interested in spirituality, which has been robbed by cellular phones, computers and television and the whole world has become addicted to these three. In addition the suffering in the world is due to the false idea that ‘I am the body’. Shrila Maharaj elaborately explained the gross and subtle bodies and the 8,400,000 varieties of living beings present in the universe as stated in the Vedas. He also spoke the hard fact that one cannot avoid death. Shrila Maharaj added that people in general have no understanding of where do they come from?, what happens after death?, why are we forced to grow old? and so on. To find answers to these is our only business as human beings. Shrila Maharaj gave details of the six stages of transformation a body undergoes in one lifetime and how the spirit soul is never born, never dies and never perishes, meaning the spirit soul is the one that is eternal and not the body. Due to poor fund of spiritual knowledge the mind is always agitated and in reality the mind is the enjoyer of the senses, not the sense organs as we wrongly think. When speaking about love and lust, Shrila Maharaj said that in a need based relationship there is no love, only lust prevails. Whereas true love belongs to the spiritual world. He also mentioned that only chanting the holy names of Lord Krishna or Vishnu can bring wonderful effects in one’s life. His speech concluded with an interactive question and answer session from the inquisitive listeners. A truly soul-awakening discourse that really awakened the attendees present. The UGA community members also received the Bhagavat vani magazine from Shrila Maharaj. 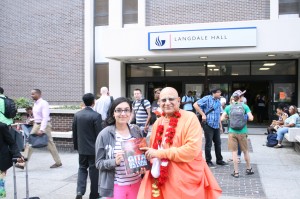 Science gives a limited picture of reality, but there is abundant evidence suggesting that part of reality exists beyond the reach of our senses and scientific instruments. The world scriptures reveal the spiritual aspect of reality, including God. God primarily reveals Himself through scriptures known as the Vedas, which contain a vast amount of knowledge about God and reality. Among them, the Shrimad Bhagavatam and Shrimad Bhagavad Gita provide the most focused explanation of God and reality. Shrila Maharaj gave discourses from the most esteemed literature, the Shrimad Bhagavatam everyday between Apr.14th and Apr. 30th in the Alpharetta area. Sincere seekers from other states like Alabama, Tennessee and Kansas and visitors from India also attended the programs consistently. Shrila Maharaj spoke the 3rd Canto giving detailed explanations about the Creation of the Universal form, Brahma’s manifestation from Garbhodakashayi Vishnu and his prayers for Creative energy, Divisions of the Creation, Calculation of Time from the atom – the microcosmic and macrocosmic time and others. The scriptures say hearing Shrimad Bhagavatam from a self realized pure devotee of God is very important. It is worth mentioning that Shrila Maharaj is one such exalted personality, following the authentic guru parampara and presenting the scriptures as it is without far-fetched interpretations. Krishna prasadam was served everyday after the morning and evening programs. 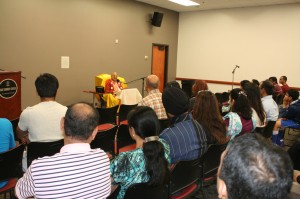 Shrila Maharaj traveled to Houston, Boston and New Jersey as part of Gaudiya Vaishnava Association’s ‘Spirituality in Spring’ program. On May 10th, at the prestigious Dartmouth College, one of the Ivy Leagues he delivered an enlightening lecture on the “Nature of the Soul” and conducted an in depth workshop for the students. His transcendental teachings elevate the listeners to a far superior position where they can experience real peace and happiness. These treasures come in the form of his books, CDs and DVDs in English, Hindi, Tamil and Bengali. Please call 1-888-9GVA-USA or email at – usa@bhagavatvani.org for all your spiritual needs.