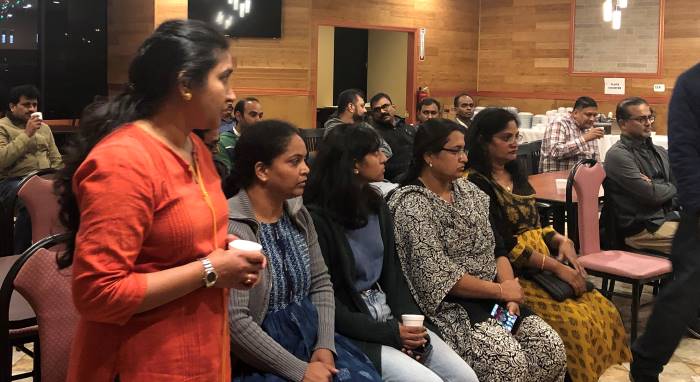 Atlanta, GA, January 10, 2020: “Yatra naryastu pujyante ramante tatra Devata, yatraitaastu na pujyante sarvaastatrafalaah kriyaah,” (Where women are honored, divinity blossoms there. Where women are dishonored, all actions, no matter how noble, remain unfruitful), says a famous shloka from Manusmriti, which has served as a foundational work on Hindu law and jurisprudence in ancient India for at least 1500 years.

And yet, rape is the fourth most common crime against women in India. Much reminiscent of the infamous Nirbhaya rape case that shocked the nation’s capital and reverberated throughout the country seven years ago, on November 27, 2019, another woman, Disha (name changed per parent’s request), a veterinary doctor from the Indian state of Telangana, was brutally gang-raped and murdered. They burned her body. It all happened while traveling home alone on a scooter, after Disha got off at a toll plaza. A group of four men deflated the tires of her scooter and then, pretending to help her fix it, took her away to a secluded spot,  raping and eventually killing her. The police recovered her body the following morning and nabbed four culprits on November 29, 2019. The arrested four were killed in a police encounter on December 6, 2019.

ATA and the Atlanta Telugu community held a candlelight vigil in memory of Disha and other victims of sexual crimes, on December 1, 2019 at Biryani Pot in Johns Creek. A Facebook group was also created to provide global citizens a platform to insure timely and appropriate punishment to the guilty and help victim’s family. The group also intends to work towards 911 kind of service in India and stand up for justice to all the rape victims.

The simple ceremony involved observing silence, lighting of candles and attendees sharing their thoughts. Expressing grief and anger in equal measure, most attendees took to stage to convey their message. The crime had hit close to home for some, including Dr. Sreeni Gangasani who said the victim had lived close his hometown. While some opined that the culprits be hanged, others including Aparna Bhattacharya from Raksha said it was important to address the root cause.

“Rape is not about sex. It is about power and control,” quoted Bhattacharya. Citing the 16 Days of Activism against Gender-Based Violence campaign observed between 25November and 10December, Bhattacharya reinforced the fact that the issue was universal and needed to be addressed by bringing about changes within the mindset of society and an effort to change the culture. “How do you change the culture?” she asked. “You can start with simple things at home, by not forcing your children to hug someone that they don’t want to. Teach boys about consent and girls that it is ok to say no.”

Violence against women transcends borders and cultures. On 25 November 1960, sisters Patria, Minerva and Maria Teresa Mirabal, three political activists who actively opposed the cruelty and systematic violence of the Trujillo dictatorship in the Dominican Republic, were clubbed to death and dumped at the bottom of a cliff by Trujillo’s secret police. In commemoration of their deaths, 25 November was declared International Day for the Elimination of Violence against Women in Latin America in 1980 and formally recognized by the United Nations in 1999. The 16 days of activism begins with the International Day for the Elimination of Violence Against Women and ends with International Human Rights Day on 10 December, highlighting the fact that violence against women is a fundamental violation of human rights. The activism is run by over 6000 organizations across 187 countries. The theme this year, incidentally is “Orange the World: Generation Equality Stands against Rape!”

Rooted in a complex set of patriarchal beliefs, power, and control, the heinous act of rape continues to create a social environment in which sexual violence is pervasive and normalized. We become part of that culture through our actions and inactions, attitudes that prevail unquestioned, impunity for perpetrators and stigma towards survivors. While names, times and contexts may differ, women and girls have universally experienced rape and sexual abuse since decades.

The death sentence handed down to the Nirbhaya rapists did not deter Disha’s killers. Even as perpetrators of the Disha’s crime were killed in a police encounter, four other rapes were reported in the same week and a day after the encounter, a rape survivor was set ablaze by five people, including two accused of raping her. These gruesome crimes are fueled by indifference toward the rights of women and the consequences of violating them.

No, it is not about reforming the rapist or if he is even deserving of it. But rather, the acknowledgement of a fundamental flaw in understanding women’s rights and rectifying the existing mindset.  As we mourn the Asifas, Nirbhayas and Dishas of the world, we can perhaps begin with our own attitude change at home, and hope that society follows suit, to provide safer environment for women to thrive with respect and dignity. It should not take the rape and death of another woman to remind us of humanity that has been lost, respect that has vanished and a society that undermines its women.