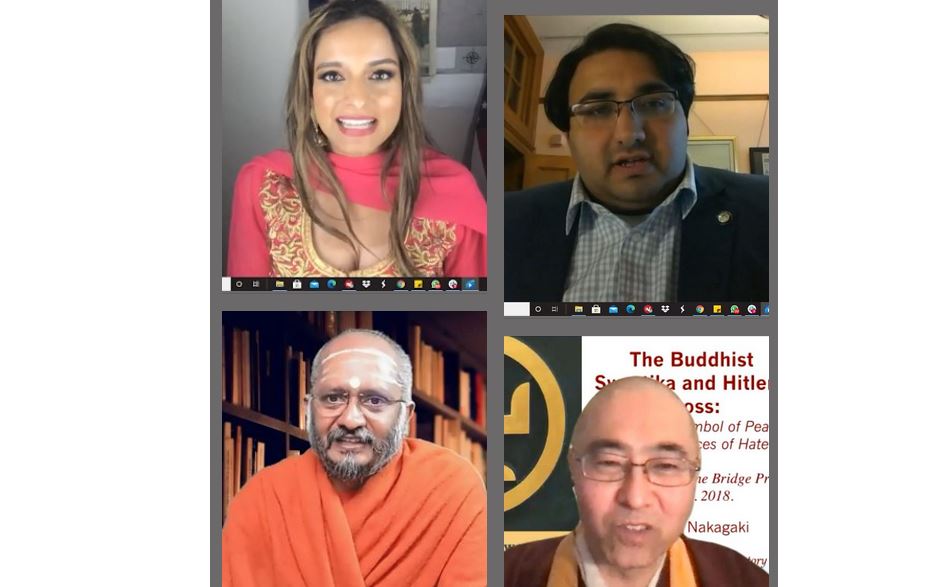 New Jersey, May, 25. 2021: The Coalition of Hindus of North America (CoHNA), a grassroots Hindu advocacy and civil rights organization, celebrated its one year anniversary this past weekend. The virtual event attracted prominent community members, faith leaders, volunteers and their families from states across the United States and Canada. Speakers drew attention to the growing need to strengthen advocacy for the Hindu community and tackle Hinduphobia and showcased the successes CoHNA has had in driving attention and action to these issues.

Keynoting the event, Swami Sarveshananda ji, National Director of Chinmaya Yuva Kendra West, highlighted widespread ignorance and misunderstanding about Hinduism among Hindus and non-Hindus alike. Swamiji was encouraged that organizations like CoHNA are stepping up to address the gap created due to the lack of awareness of our own history, our identity and “a lack of reconciliation of the trauma inflicted generations ago by waves of invaders and colonizers.”

“It is upto organizations like CoHNA to address the genuine curiosity towards Hindus and Hinduism, advocate for better understanding of the same and combat negative portrayal of Hindus in media, social media and school textbooks,” said Ohio State Senator Niraj Antani, the first and youngest Hindu to be elected to the Ohio State Senate as he shared his experience of growing up and campaigning as a Hindu.

New York Assemblywoman Jennifer Rajkumar, the first Hindu ever to be elected to New York State Assembly, spoke of the core values of the tradition. “As Hindu Americans emerge and organize, we must remember to always put our best foot forward and answer naysayers with love, because Hinduism has always promoted mutual respect and interfaith harmony.” She also surprised CoHNA with a proclamation from the State of New York recognizing CoHNA’s contributions towards Hindu causes to date.

Following the keynote addresses, Nikunj Trivedi, President of CoHNA provided an overview of the organization and its work around protecting the interests of the Hindu community. Many of these efforts centered on elevating the voices of persecuted Hindu minorities of Pakistan, Bangladesh and Afghanistan as well as in Indian states like Jammu & Kashmir. The efforts of Hindu Parents Network in equipping families with solutions and strategies to raise the next generation of Hindu children were also highlighted.

Another success story centered on CoHNA’s Swastika campaign which was instrumental in educating the larger community of its sacred importance to Hindus and other Dharmic traditions. CoHNA’s efforts in conjunction with other organizations and support from important political leaders ensured that the State of New York decided against passing a bill that would have mistakenly condemned the Swastika as a hate symbol.

CoHNA aims to continue advocacy work on behalf of North American Hindus and to strive for a better understanding of Hindus and Hinduism. Ongoing efforts include declaring Diwali as a school holiday in NYC, deconstructing “caste,” the colonial trope, supporting Hindu students at Rutgers against Hinduphobia, and many others.

Other esteemed guests at the event included Rev. Dr. T.K.Nakagaki, noted author of “The Buddhist Swastika and Hitler’s Cross” and Arnav Kejriwal, the National President of Hindu Students Council.

The event showcased a variety of testimonies from volunteers and supporters who shared their personal stories about why they are part of the CoHNA movement. One such story came from AdityaShaligram, a 6th grader and the youngest attendee,who won the hearts of the audience with his endearing story of being part of the “Beautiful Tree” Program by Hindu Parents Network (an initiative of CoHNA).