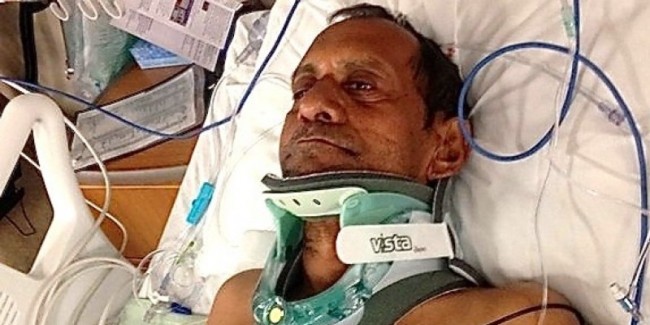 Washington, Nov 6 (IANS) A leading South Asian community organisation has expressed “outrage” over the declaration of a second mistrial in the case of an Alabama police officer charged with slamming an Indian grandfather to the ground.

South Asian Americans Leading Together (SAALT) also asked the community to be vigilant and engaged in the efforts of the movement for Black lives to draw attention to the ways in which Black communities in particular, as well as other communities of colour, are facing state violence.

SAALT said Thursday it was “outraged” that a second mistrial was declared by a federal court in Huntsville after a deadlocked jury once again failed to convict Madison, Alabama police officer, Eric Parker.

Parker was captured on video slamming Sureshbhai Patel to the ground, to the point of partial paralysis in February after Patel, initially identified by a neighbor as a “suspicious Black man,” repeatedly told the officer he could not speak English, it noted.

The US Department of Justice re-tried the case after the first mistrial was declared in September.

“While the trial was supposed to focus on the unreasonable use of force that Parker used on Patel, it was Patel’s immigration status and English proficiency skills that were really on trial,” said Lakshmi Sridaran,

Director of National Policy and Advocacy at SAALT. Indeed, in his opening remarks, Parker’s attorney said: “When you come to the US we expect you to follow our laws and speak our language. Mr. Patel bears as much responsibility for this as anyone.”

“We continue to believe in the strength of the evidence and that the defendant’s actions violated the constitutional rights of the plaintiff,” said Bhavani Kakani, President of AshaKiran.

“As we see time again with police brutality cases in this country, particularly with Black victims, the message of this case is loud and clear: that police brutality rarely warrants punishment.”

Dante Barry, Executive Director of Million Hoodies United, noted: “It is absolutely devastating to hear the news from Alabama as it reflects a deep pattern of unfairness for people of color.

“Although grounded in anti-blackness, police brutality by law enforcement and immigration enforcement is no stranger to South Asian communities and it is indicative of this political moment to be on the path to justice,” he said.

“The case of Mr. Patel provides an opportunity for South Asians to become active participants in the demands of the movement for Black lives,” said Suman Raghunathan, Executive Director of SAALT.