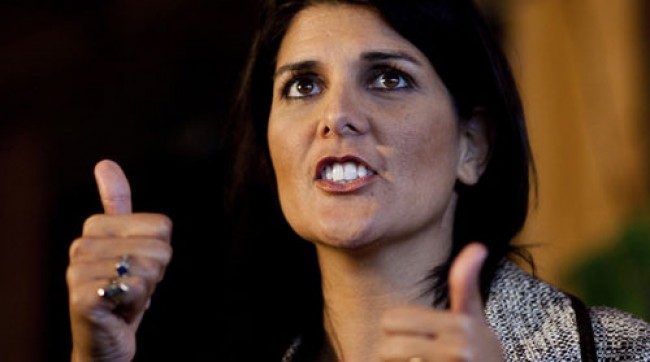 Washington, April 18 (IANS) US Ambassador to the UN Nikki Haley has hit back at the White House over claims that she had prematurely announced fresh sanctions against Russia, media reports said.

Several administration officials said Haley got ahead of President Donald Trump’s decision-making when she said on Sunday that the US would level new sanctions on Monday targeting Russian companies that facilitated the Syrian regime’s chemical weapons programme, reports CNN.

The sanctions are yet to be announced.

“She got ahead of the curve,” National Economic Council Director Larry Kudlow told reporters on Tuesday near the President’s Florida estate, a day after a report claiming Trump “put the brakes” on plans for new Russia sanctions.

“She’s done a great job, she’s a very effective ambassador. There might have been some momentary confusion about that.”

Haley struck back later Tuesday that raised questions about the White House’s explanation of her comments.

“With all due respect, I don’t get confused,” she said in a statement.

A White House official said Kudlow apologised to Haley for saying that she might have been confused.

“She was certainly not confused,” Kudlow told The New York Times by telephone.

“I was wrong to say that… Totally wrong.

“As it turns out, she was basically following what she thought was policy. The policy was changed and she wasn’t told about it, so she was in a box,” he added.

It was not immediately clear whether Trump had spoken directly to Haley since she her Sunday statement.

Trump has previously praised Haley’s performances at the UN Security Council to his aides as she makes the administration’s case on Syria.