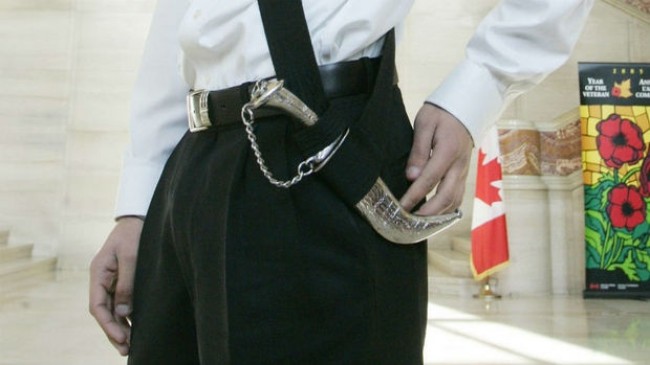 Washington, Sep 22 (IANS) The US police surrounded a Sikh man carrying a Kirpan — ceremonial dagger — in Pennsylvania after receiving multiple calls about an apparent Muslim man walking around a shopping centre with a “large knife” or “sword”.

Harpreet Singh Khalsa, 33, said he was a victim of racial profiling in Northampton county, but the police said those who called in their concerns did the right thing, WFMZ TV reported on Wednesday.

The police received multiple calls about an apparent Muslim man walking around the Bethlehem Square Shopping Centre with a “large knife” or “sword”. Multiple officers responded to find Khalsa sitting inside a van parked in the fire lane.

“The cops surrounded me and told me to put my hands on my head,” Khalsa said.

Khalsa, visiting from Maryland, was not carrying a “large knife” or “sword”. He was wearing a Kirpan, attached to a strap called a Gatra. The Kirpan is one of five articles of the Sikh faith.

“Kirpan represents the Sikh duty to be compassionate, kind and to protect people. It’s not thought of as a weapon,” said Khurram Hussain, a Religious Studies Professor at the Lehigh University in Bethlehem, US.

Khalsa said he was scared having so many officers around him and added that he was embarrassed, humiliated, ashamed, for even bothering to come to Bethlehem.

Given recent attacks in New York and Minnesota, officers said people were on higher alert. “People are a little sensitive to things that are unusual,” a police officer added.

“They did the right thing. They called for us to come and check it out.” But Khalsa said he was racially profiled and misunderstood.

“To have a caller in the first place is pointing to racism, clearly racism,” Khalsa said. “Fear-driven racism,” he added.

Khalsa was not charged, and his Kirpan was returned to him. But Khalsa said he does not plan to come back to the Lehigh Valley and called the way he was treated “un-American”.