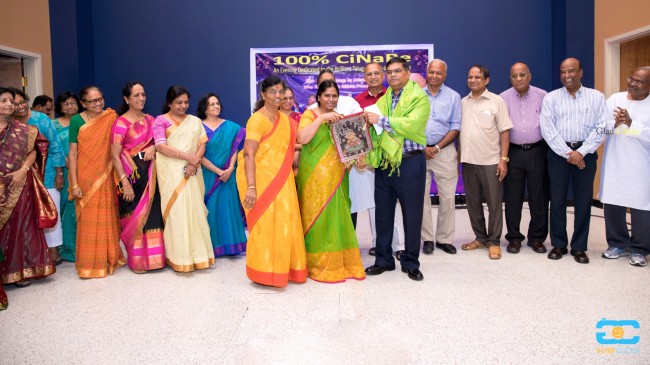 Atlanta, GA, October 2, 2017: “We had a great evening after a very long time. Every song was a classic and well rendered by our own Atlanta artists. A well-organized event.” That was the comment by a senior couple, who drove for three and half hours to attend ‘100% CiNaRe’ – a evening of Dr. C. Narayana Reddy songs on Sunday, Aug 27, 2017 in Atlanta. Not only that couple but everyone who was present at the event had one common thing to say: “A truly deserving tribute to Cinare with so many wonderful songs written by him”.

In this event, put together by ‘Maitri’ – an Organization for Visiting Parents and Seniors in Atlanta, about 30 all-time favorites were presented by ten Artists. Led by Ram Durvasula, a well-known Singer and DJ in the US, the 4-hour program was attended by about 140 seriously interested audience. 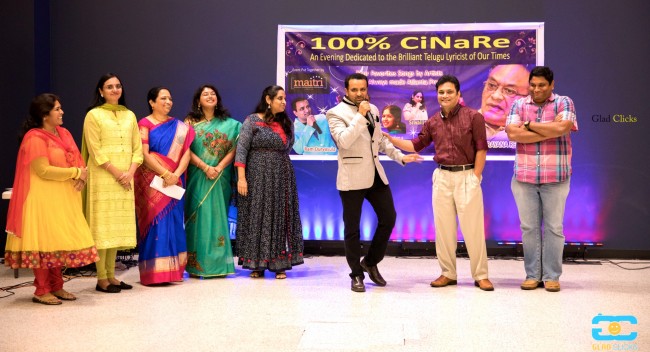 As most Telugu speaking people all over the world know, Cinare who recently passed away, was a legendary lyricist, writer and an academician. He started his career as a lyricist in 1962 and soon his songs became an instant hit. Until late 80s he wrote about 3000 songs. Dr. Reddy wrote several lovely Ghazals in Urdu. He was awarded the Padmasri and Padma Bhushan. He received Gnanapeeth Award for his unique piece of literature ‘Viswambara’ in 1988. Earlier he won Sahitya Academy Award in 1973.

During the break, Prabhakar Rao Kadiyala and Subba Rao Vudathu, members, spoke about Maitri and its activities. Mrs. and Mr. Subba Rao Vudathu were felicitated for being the founder-members since the organization’s inception in 2008. Maitri helps all the visiting parents in Atlanta come together and spend time by discussing topics related to post-retirement like healthcare, literature, etc. Maitri meets every month on second Sunday.

The event was sponsored by Kiran Pasham, Amruthavarshini, another organization that organizes literary events and Venkat Chundi. Refreshments were the courtesy of Biryani Pot while Photography were handled by John Gladson. Sidhu Sridhar and Nabhanyu Chiluveru were behind the stage handling the audio.

Before the event ended, Viju Chiluveru, Director of ‘Maitri’ thanked the audience, artists, volunteers, sponsors TAMA and GATA (Telugu community organizations) for sending out newsletters and everyone who helped during the event. He also thanked Praveen Puram and Niranjan Podduturi for public and media coverage. Kishan Tallapalli was thanked for his unconditional support to all Maitri events.