The show was brought to Atlanta by the team of Gayatri Krishnan, Radha Katta, Shwetha Hombaiah and Sunitha Freeman. 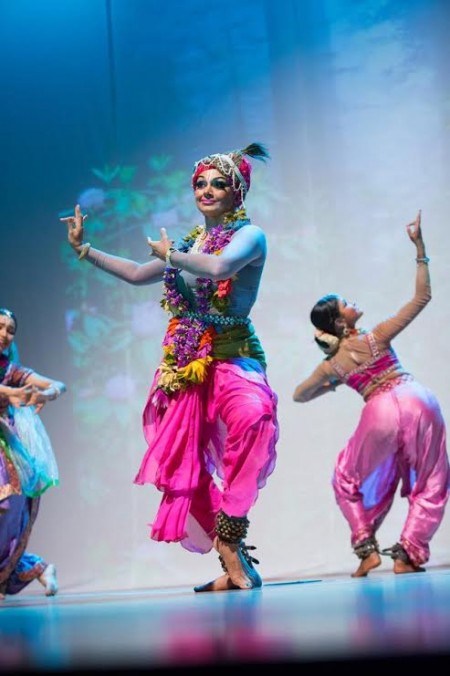 Krishna was first performed on 22nd August, 2011 in Chennai, India on Krishnashtami Day (Lord Krishna’s birthday). This English version of Krishna has been conceived, created and choreographed by Shobana after long years of research, training and practice. The role of Krishna is played by Shobana accompanied by a group of 16 artists including her daughter Narayani.

The design of Krishna does not follow the conventional patterns. Instead, it is a symphony of various dance forms ranging from ancient classical forms to Bollywood film dances. Various episodes from Krishna’s eventful life andIndia’s one of the most popular epics Mahabharata were narrated through spectacular dances by highly proficient Shobana asKrishnaand her well trained troupe. The well-coordinated and executed dances with grace and agility were a visual feast. The dancers in multi-hued costumes and ornate bodily adornments, weaved intricate footwork patterns, showed great fluidity and emoted well with their facial expressions. It was like poetry in motion!

The riveting dance drama begins showing the birth of Krishnaand her mother Devki handcuffed and in chains. Krishnais secretly taken away from haughty and wicked Kamsa, to Gokul, to be raised by Yashoda and Nanda. Krishnagrows up and kills Kamsa. (dhoom machale song lends an extra punch here). He holds up Govardhan Hill to shelter the villagers and animals etc. from heavy rains unleashed by Indra. (The popular song Ghanan ghanan adds extra sparkle).Krishna advises village folk to stop offering sacrifices to appease the gods. The prankster cowherd Krishna is shown playing his flute and flirting with Radha and other gopis in Brindavan.The songs Giridhar khelat Giri ke rai (Krishna Leela) and another popular Lagaan song ‘Radha kaise na jale’ together with the enchanting garba-raas were a delightful treat.Krishna tames the serpent Kaliya. He befriends lord of the air Garuda who had previously fought with him atop the Gomantaka hill. The dance drama then deals with episodes aboutKrishna and Pandavas. At Draupadi’s swayamwara, Karna lifts the bow but she refuses to marry him. AtKrishna’s urging, she marries Arjuna and later all five Pandavas.Duryodhana and his maternal uncle Shakuni cheat Yudhisthira in gambling. Yudhisthira loses everything including Draupadi. Duryodhana’s brother Dushasana drags her into the court. Duryodhana pats his thigh looking at her. Infuriated Bhima vows that he would break Duryodhana’s thigh one day. Dushasana is seen trying to disrobe Draupadi butKrishna helps her. An infuriated Bhima vows that he would break Duryodhana’s thigh and Dushasana’s arm one day.Krishna acts as an emissary to prevent a ruinous war between Pandavas and the avaricious Kauravas but to no avail.

Rukmini wanted to marry Krishna. The Rukmini sandesh in lyrical prose was displayed on the giant screen. “Please accept me as your consort so that Sisupala doesn’t take me away-just like a jackal should not take away the prey of a lion. Arrive secretly and after defeating Sisupala and Jarasandha, marry me. If not I will end my life.”Krishna marries her. Krishnasides with Pandavas and guides them in the war. In the end Bhima confronts Duryodhana. Both fight with their maces. Duryodhana is having an upper hand so Krishna signals Bhima to hit him on his thigh. After Duryodhana’s death, his mother Gandhari accuses Krishna of helping Pandava win the war by deceit. “You did not spare even a single son of mine. You failed my sons. For me, you failed. You will never know a mother’s pain. I curse you-May you die in a forest hunted down like a beast”. The curse comes to pass. A hunter shoots an arrow a tKrishna and kills him. It is said Yato dharma tato Jaya. (Where there is dharma, there is victory)In the end,Krishnaafter a short religious discourse to Arjuna, dazzles him with his divine Virat Swaroop. In depicting this, Shobana received a resounding ovation.

The background design of the performance provides the natural scenery of green woods, pastures, gorgeous waterfalls, and the majestic ambience of Mathura, Brindavan and Kuruskhetra.

Shobana in her stellar role of the multifaceted Krishna was the cynosure of the spectacular show,-the crème de la crème. The dances were quintessential dance artistry that won repeated applauses and a thundering ovation at the end.

Though the story of Krishna has been told in several languages, this is the first full-fledged song and dance performance onKrishnain English. The sound mixing is done by the Oscar winner Rasool Pookutty. The voice of the characters are rendered by some of the best known film actors from India: Surya for Arjuna, Konkana Sen for Radha, Shabana Azmi for Gandhari, Shobhana for Draupadi and actors like Andrea Jeremiah, Sukumari, Prabhu and Radha.

Ekal Vidyalaya was represented by Kiran Kodithala, two Ekal volunteer children and several volunteers.  They tried an innovative approach to spread the message about Ekal Vidyalaya Foundation(EVF) which is a non-profit Organization,which strives for holistic development of rural and remote tribal villages inIndiaby providing functional education that includes basic literacy, health and hygiene, economic development and social empowerment. Today, 53125 Ekal schools, each running on an annual donation of only $365, provide basic education to nearly 1.45 million students, half of them girls. In his speech, Kiran noted that 30 million children still live in poverty inIndiawith the consequent evil of illiteracy,disease,etc. Unless addressed this problem will impact the future ofIndia.  The Ekal Volunteers urged the audience to save at least a dollar a day and support Ekal eradicate the scourge of illiteracy.

Before the show began, the organizers Gayatri Krishnan, Radha Katta, Shwetha Hombaiah, and Sunitha Freeman came on the stage. Sunitha Freeman warmly welcomed all. She further welcomed Shobana ji and her Kalarpana troupe for bringing her musical extravaganza to Atlanta. She stressed that the show would not have been possible without the generous support of sponsors Charter Global, Orion Systems, the media sponsors and food sponsors. Their support has enabled them to support Ekal Vidyalaya.

The chief guest Dr. Nazeera Dawood, Program Manager at Fulton County Department of Health and Wellness was invited on stage to present a shawl as a token of appreciation to Shobana. Flower bouquets were then presented to both Shobana and Dr. Dawood. In her brief remarks Dr. Dawood said on her trip to India, she had visited the Taj Mahal and was also fortunate to visit Mathura and Brindavan and ring a temple bell. She felt great peace there. She applauded the Krishna show and said, her message to the audience and children was to participate in civic engagements and to promote unity and peace.