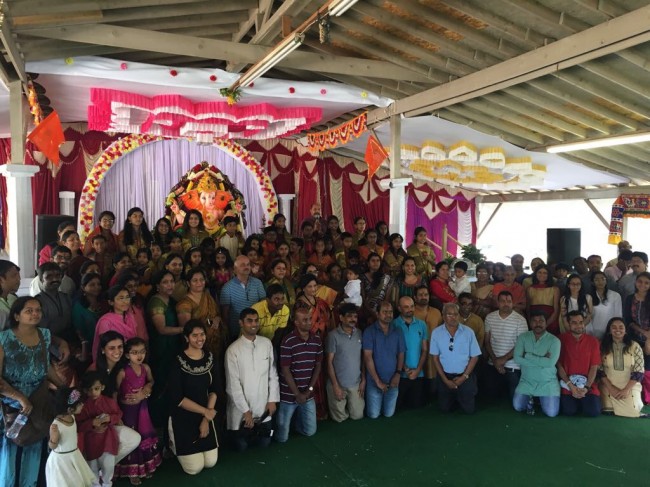 Atlanta, GA, October 2, 2017: The Hindu Temple of Atlanta in Riverdale, Georgia, (HTA) organized a spectacular Ganesh Utsav celebration from August 25 to September 2 2017, which attracted hundreds of devotees from Atlanta and places as far as Arizona, Pennsylvania and Florida.

HTA, under the leadership of Ravi Chander (Volunteers Committee) has been hosting the Ganesh Utsav for the past four years. A majestic ten-foot eco-friendly clay idol of Ganapathi was again specially made in Hyderabad for HTA and installed in the specially built canopy in the forecourt between the Balaji and the Shiva temple.

Ganesh Utsav celebrations began with Ganesha havan and a special abhisekham. On Friday there was a group Ganesh Chavithi pooja. A wooden stage backdrop constructed by Ananth and team of volunteers, under the canopy was an ideal setting for the dazzling idol of Lord Ganesh, resplendent with rich adornments, artistic décor, and lavish fresh vegetables, flowers, and fruit garlands.

A Ganesha-making workshop was held for kids. HTA supplied materials and instructions to over 2,000 families and kids to make about 2,500 environmentally friendly clay Ganeshas. Families enjoyed a day of designing and creating their very own personal Ganeshas. A puja for these handmade Ganeshas was performed in the mandap later.

HTA provided laddu and vada for naivedyam, and parents brought Ganesha’s favorite food, modakam. The grand pooja by Sri Srinivas Sarma concluded with Mangala Aarathi and blessings to the children. 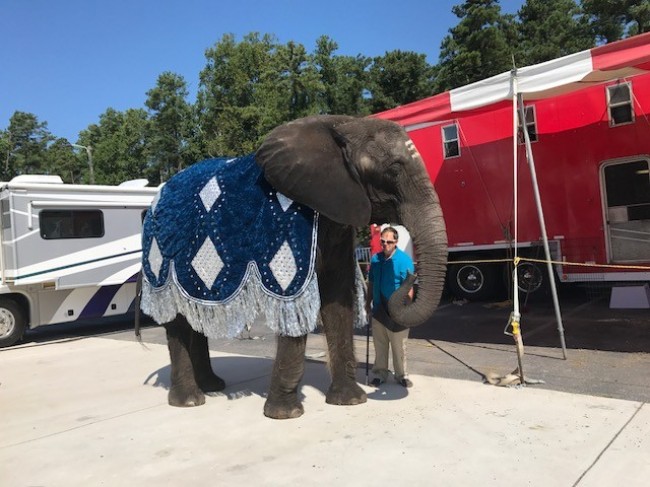 Swathi and Shrikant emceed the cultural program with verve. The visarjan in Savannah, GA was emceed by Radhika and Nanda.

During the festival, many Indian organizations like the  Punjabi Society, GCANA representing the Gujarati community in Georgia, GATS, TANA, TAMA, ATA (to name a few) members and students of many Dance and Music Academies in Atlanta enthusiastically participated in the rituals and in the spirited  day-long cultural program. The dance and music academies had trained their students and dressed them up in colorful costumes to perform in the festival.

These students vied to outperform each other in solo and group items before the imposing idol of Lord Ganesha. The audience were treated to classical; contemporary, folk and fusion, dances, dance-dramas and devotional songs in Hindi and Carnatic. The Natyajyothi Kuchipudi Dance Academy performed captivating Brahmanjali and Ganesh Pancharatnam.Pushyami Gottipati, Artistic Director of Sai Nrityalaya,  presented a riveting dance-drama Sri Rama Pattabhishekam,and also Ganesa Pancharatnam and her students presented Kolatam dance to Ramadasu keertanas.

Akhil presented a heart-thumping Sri Ganesha Deva Sri Ganesha dance, while PK Raj and little elves performed a fast beat dance. There was a hypnotic Odissi dance too by Bikhipta Panda. Srinivas from India sang folk songs. Neelima Gaddamanugu’s Nataraja Natyanjali students also enthralled the audience with a few elegant dances. Some of Atlanta’s personalities noted for their dancing and/or  singing  prowess (some of whom run their own dance and music academies) like Jyothi Chintalapudi, Revathi Komanduri, Sridevi Dadithota, Pushyami Gottipati, Sasikala Penumarthi, Padmaja Kelam, Divya Srivastava,  Renuka, Aparna Turaga, Hema Shilpa, Varsha Jinka and Savitha Viswanathan also regaled the audience either through dancing  or singing. This was not all. The energetic dancers clad in white kurtas, (complimentary by  Sunil Gotoor)and with saffron headbands played Holi with colored powder, and also performed Kolatam (dandiya) to high octane beat of  dhols,

The day was marked with nonstop entertainment and spiritual fervor. Over 5000 devotees and visitors participated in the preculmination of the nine-day celebration with a grand Ganesh Nimajjanam ceremony.

Elephants are believed to remove all obstacles and bring good fortune. This year HTA brought an elephant named Ana from Gainesville, GA to add sparkle to the festival. Ana was decked out for the ceremony with Lord Siva’s vibhuti and thilak.

Ana was a favorite with the children! The HTA hosted kids night out at the temple. The children were treated to stories, movies, watching early morning sunrise, yoga exercises, temple tour and games like kho kho.

A huge procession around the temple was accompanied by live music. It was exciting to watch a shower of flower petals float down gently on Ganeshji from a helicopter!

Finally, it was time to bid farewell to much-loved Lord Ganesh. Enthusiastic young devotees came out of the canopy, dancing and shouting “Ganapati Bappa Morya” to the pulsating beat of dhols as Lord Ganeshji’s idol was placed in a truck, which was followed by HTA President Kusuma Kotte,Vice-President Sheela Lingam, Ravi Changer, priest Pavankumar, Sairam Surapaneni and devotees. They were warmly greeted at the SGVP Gurukul in Bloomindale, GA. Ganesh Visarjan ceremony was performed in Savannah, with joyous shouts and wishes for his return the following year. As they say, “with the immersion ceremony, the Form (physical) returned to the Formless (spiritual).” The Ganapati idol became one with the water.

One of HTA’s ardent devotees, Sudhir Agarwal who is President of Rajasthan Association of GA and IPN Atlanta Board member commented, “This is the greatest Ganapati Chaturthi celebration in the Southeast US.I feel spiritually uplifted when attending these celebrations. The vibrant ambience with color, festive spirit and coming together of the community is incredible. My special thanks to Ravi Chander ji for taking the initiative to start this in Atlanta so our kids can learn about the rich Indian culture by participating in the festival. I recommend all Indian-Americans in Atlanta to attend the celebrations in future.” 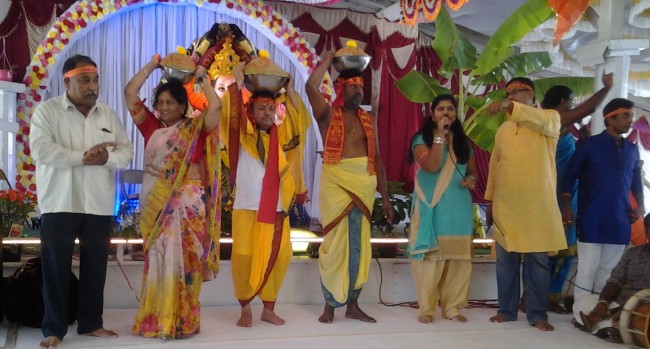 HTA President Kusuma Kotte personally and on behalf of the Executive Committee and Board of Trustees thanked everybody that participated in this year’s festivities, and commented, “We are highly indebted to countless volunteers and their families for the stage decorations, all the photo and videographers, and  Nate Natesan for promoting Swacch Devalaya. The Hindu Temple of Atlanta recognizes and deeply appreciates the efforts of all the organizations, Dance and Music Academies, Softpath System, LLC, Vaisheshi Jalajam, Mehul Raja,  and media partners Wownow, NRI Pulse, Atlanta Dunia, Rashtradarpan, TV Asia, Khabar, Deccan Abroad and Mahadev Desai.

The executive committee and management of HTA are deeply appreciative of Ravi Chander, chief coordinator of the festivities; and food committee chairperson Padma Koganti and her team with temple cooks who  worked very hard to arrange Prasadam  for all the devotees.  Puja committee chairperson Phani Tummala along with the temple priests ably coordinated this year’s rituals and deity decorations. We are highly indebted to countless volunteers and their families in particular for devoting countless hours in spite of their busy schedules, to make the celebrations a grand success.

The celebrations could not have been possible without the office staff and volunteers. We also beg the forgiveness of every one for any lapses and shortcomings and will make every effort to rectify them in the celebrations of next year.”