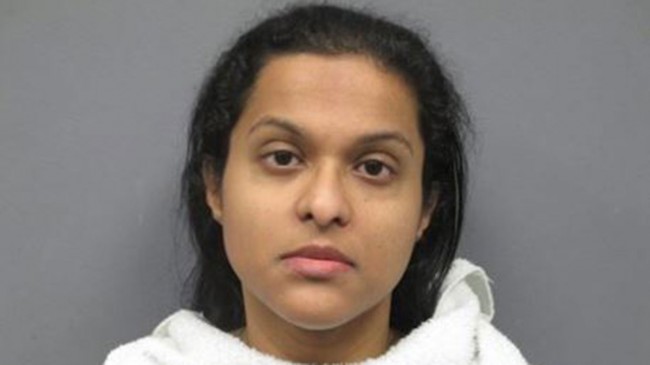 Washington, Nov 17 (IANS) The mother of Sherin Mathews, a three-year-old Indian girl who was found dead in a ditch last month in the US state of Texas, has been arrested on the charge of child endangerment.

Police said Sini Mathews and her husband Wesley Mathews left the child home alone while they went to dinner on October 6, the night before she was reported missing by her foster father.

Sini Mathews, 35, surrendered to the Richardson police on Thursday and was being held on $250,000 bond in the state jail on the felony charge, the US media reported.

In a statement, Richardson police said detectives learned Sini and Wesley Mathews took their 3-year-old biological daughter to dinner and left their adopted daughter, Sherin, alone at home, placing her in “imminent danger of death, bodily injury, or physical or mental impairment”.

According to an arrest warrant affidavit, detectives used cellphone records to show that the couple went to a North Garland restaurant on the evening of October 6. A receipt obtained by police showed the couple purchased only one child’s meal in addition to their individual meals, NBC 5 Dallas-Fort Worth reported.

Wesley Mathews told detectives in an interview on October 23 that he and his wife had left Sherin Mathews at home while the rest of the family went out. He said he left the child after growing frustrated when she refused to drink her milk.

Police said they have not determined whether the girl was alive when the couple returned home an hour and a half later, the Dallas Morning News reported. An affidavit said the toddler was in the kitchen where they left her.

Wesley Mathews remains jailed on a charge of felony injury to a child and is being held on a $1 million bond. He initially said he sent Sherin Mathews outside to an alley near their house about 3 a.m. because she refused to drink her milk.

However, later he said that he “physically assisted” her with drinking milk in the garage of their house. The child began coughing and choking, her breathing slowed and then there was no longer any pulse. He admitted to removing the body from the house.

Sherin Mathews’ body was found in the culvert under a road about one kilometre from her home in suburban Dallas on October 22. Her parents adopted her in June 2016 from Bihar.

Sini Mathews said she was sleeping when Sherin disappeared and was unaware of what took place overnight. Her attorney maintained throughout the investigation that she had nothing to do with her daughter’s death and that she was distraught.

Sini Mathews was in court earlier this week asking for custody of the couple’s biological child to be returned to her, but that hearing was rescheduled for November 29. The couple’s surviving child was put in foster care shortly after her sister’s disappearance.