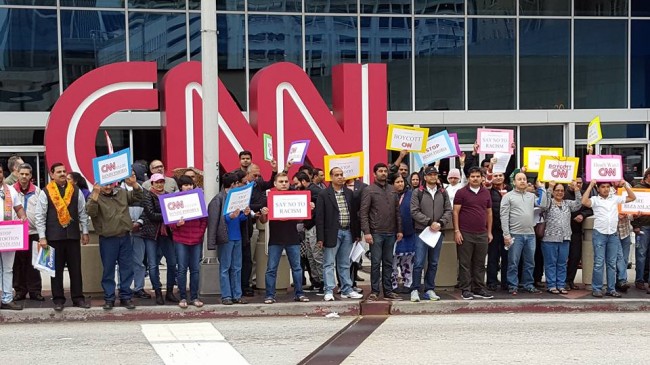 Atlanta, GA: Over 150 people, both young and old, weathered a cold, windy day to protest against the first episode of CNN’s ‘Believer’ series where its controversial host Reza Aslan picked a small sect of Aghoris  while stating in the opening scene of the show that he had come to Varanasi in India to make a show about Hindus.

“Aslan appears to have an axe to grind against Hindus by highlighting the caste system and pick on Aghoris as cannibals,” said an organizer.

Concerned Hindus and associations in Atlanta including Hindu Student Council, Vishwa Hindu Parishad, HSS, SEWA, United States Hindu Alliance(USHA), Hindu Temple of Atlanta, Vedic Temple and representatives of all other temples and groups gathered in front of CNN on March 11 holding placards and marched silently to protest and boycott CNN. They educated a large number of onlookers and concerned people on why Hindus feel such smear campaign from CNN will increase Hinduphobia and develop negative stereotypes particularly affecting our young children. 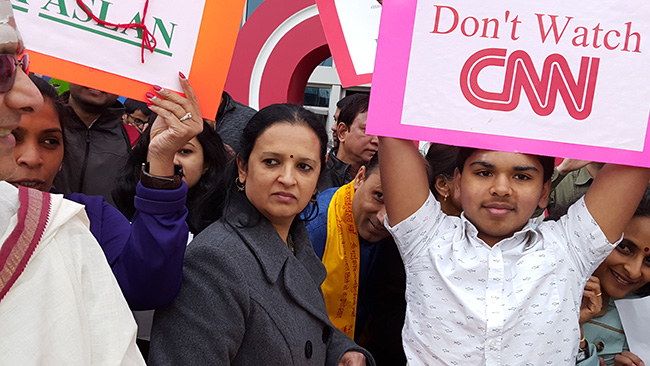 Protesters exhibited solidarity in condemning CNN and its lack of oversight to allow airing of such an ill-conceived program. Attendees expressed their anguish over CNN for not seeking the advice or opinions of Hindu experts from the community before producing or airing such a show. They felt this will have long term effect on the psyche of our young children and result in Hinduphobia.

The group decided to continue the agitation to boycott CNN and seek justice for their cause and prevent news media outlets in the future from misusing their power of mass reach and trust to air malicious stories and make the Hindu community in US vulnerable to attacks, bullying and discrimination.

US Hindu Alliance (USHA) is working on a website www.BoyCottCNN.Org and maintains the Facebook page www.Facebook.Com/CNNAntiHindu to mobilize the movement, establish goals for the cause and ensure CNN management comes forward to address its concerns before ending the campaign.

Similar protests were organized at NY,San Francisco, Chicago,Houston and other cities.

“We can expect a huge following and support from the community. The momentum is building and there appears to be concerted and coordinated agitations planned in the months ahead,” said an organizer.

Organizers expressed the larger need for more events and community support. Efforts are on the way to get more donations for the cause and leverage connections and strengths of India to stop CNN from this “audacious and insensitive attempt to marginalize a minority community that is only 1% of the US population.”