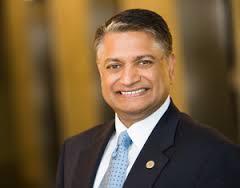 Malhotra is founder and chief executive of Subsytem Technologies Inc. in Arlington, Virginia. He becomes the first Indian-American to ever be appointed to a Governor’s Cabinet in Maryland.

He previously served in Governor Robert L. Ehrlich’s Administration as a volunteeron the Maryland Commission for Asian and Pacific Islander
Affairs.

“I am truly humbled and honored to serve in Governor Hogan’s Administration,” Malhotra was quoted as saying by the Baltimore Sun.

“I look forward to the challenge of serving as Secretary of the Department of Human Resources, and helping Governor Hogan meet his policy objectives to serve the great people of the State of Maryland.”

The Department of Human Resources has 6,500 employees and is tasked with oversight of the State’s welfare programmes. The Department has a budget of approximately $2.7 billion annually that includes Federal funds.

The Republican Indian Committee President Dilip Paliath, said: “Sam will make an outstanding Secretary, and we are proud that he will be part of the Hogan Administration. We at RIC wish him well and stand ready to help him and Governor Hogan be successful.”