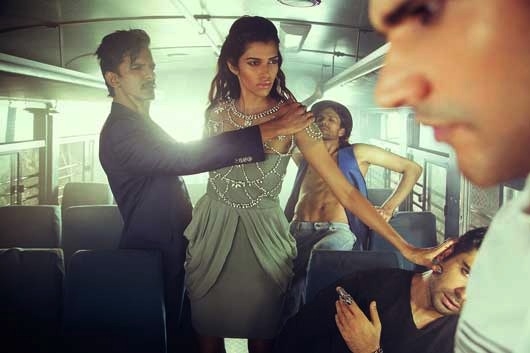 The 23-year-old trainee physiotherapist was brutally gang raped inside a moving bus in the capital by six people Dec 16, 2012, leading to grievous injuries, which caused her death later.

And for his latest work titled “The Wrong Turn”, Shetye conducted a photo shoot on a bus with female model posing like a victim and male models touching her body.

Model Amanpreet Wahi was in state of shock when she learned about the shoot.

“The photos are very disturbing. How can someone glamourize an incident like this? We entertain people, but we do not hurt others. The girl died, let her rest in peace,” she said.

“If plays are made on the subject, they are to create awareness. But glamourizing it is not the way to do it,” Wahi told IANS.

Shetye argued that the photos were not meant to mirror the incident, but to raise awareness about the issue of female safety in India. But his work sparked revulsion from all walks of life.

Photographer Rohit Kadyan says it’s good to experiment, but not at the cost of people’s sentiments.

“Being a photographer, we should try out new things, but playing with someone’s feelings is not good. Photos leave a massive impact and there is a way to interpret things,” he said.

Kadyan says that before taking such steps, one should take professionals’ advise and feedback from family.

Post Nirbhaya incident, which was widely covered by the international media, there has been a 30 percent drop in foreign tourists, says a report.

“To have a photo shoot on Nirbhaya episode was definitely insensitive. We all need to show a much higher degree of maturity and sensitivity towards such traumatic incidents,” he said.

Ratna Chadha, CEO of Tirun Travel Marketing – India Representative of Royal Caribbean Cruises Ltd, said: “This photo shoot has only added fuel to fire. We must work towards making our country a safer environment for all – men and women alike.”

Designer Jenjum Gadi feels “people are over reacting”, but adds Shetye should have had a “better approach”.

“People should react on real life incidents and not photo shoots. Everyday there is news of some minor or a woman getting raped. It’s not that I liked his (Shetye’s) work. He should’ve conveyed the message in a better way. The treatment should have been different,”

The Bill has come in the wake of outrage after a minor convicted in the Nirbhaya gang-rape case was handed a three-year term in a reform home.

Modi can apply for visa like anyone else: US