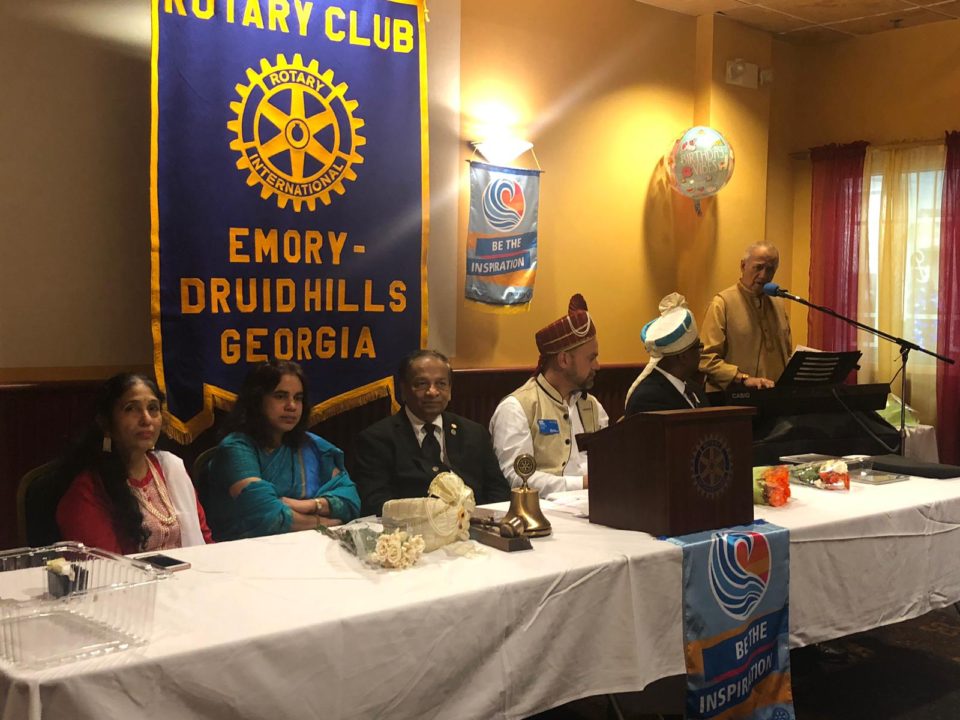 Speaking of the history of Rotary International, RCEDH President Upendra Bhatt highlighted its various achievements over the years including PolioPlus that, joined by Bill and Melinda Gates Foundation in their efforts, has almost succeeded in eradication of polio worldwide. Bhatt also underlined the work of RCEDH, which was founded 10 years ago. RCEDH projects include providing safe drinking reserve osmosis water plants in 200+ villages in Telangana costing $238K, Dialysis machines in Rajkot costing $268 K, CT Scan machine to hospital in India costing 200K, Urology department equipment to a hospital for the poor costing 423 K, completing over 1000 Cataract eye surgeries in India at $30K, helping victims of Haiti costing $10K.

“In 10 years, we have given 32 Paul Harris fellows to our district and today we are adding 42 new Paul Harris fellows and that is a record,” said Bhatt. “This is the only club in the US with all Indian origin members,” he added, joking that the added bonus was the Indian food at an Indian restaurant for the meetings.

Presenting a special membership pin made with the theme of India to Consul General Dr. Kulkarni, Bhatt said she was the new honorary member of the club. Dr. Kulkarni thanked RCEDH for the honor and talked about the progress of Rotary.

Citing a passage from Matthew: For I was hungry, Mayor Newton thanked Rotary for its hard work for the community and beyond. Driskell highlighted the role of Rotary and its significance to society.

Bhatt invited fellow Rotarians Mustafa Ajmeri, Chatur Chhabhaya, Pravin Kakadiya, Rani Singh to hand out bouquets to guests and prominent members. He recognized Rotarian couple Chandler and Dr. Paddy Sharma who visited Rotarian projects in India. All Rotarians present were also recognized for their efforts. Avantika Sridhar, a sophomore from NY made an appeal for donations for the Leukemia Lymphoma Society. NRI Pulse was also recognized at the event.

A book released during the 100th year celebrations at a convention in Atlanta was handed to the guests of honor. Ali Bhai Asani’s soulful music, cake cutting, and a sumptuous lunch wrapped up the celebrations.