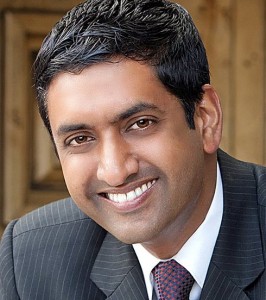 Washington, May 14 (IANS) Ro Khanna, a former Indian-American Obama administration official, has received a boost in his campaign to unseat a seven-term California lawmaker with a couple of major state newspapers endorsing him.

San Jose Mercury News and San Francisco Chronicle have both voiced their preference for Khanna, 37, former deputy assistant secretary in the commerce department.

“Ro Khanna’s time has come … We recommend Khanna… even though the incumbent is the venerable Mike Honda, whose personal graciousness and alignment with Democratic and labour causes have endeared him to many,” Mercury News editorial board wrote.

Khanna “has prepared himself well through his career choices and by undertaking thoughtful analysis of the big issues affecting Silicon Valley’s ability to thrive,” it said.

An intellectual property attorney, Khanna has “developed theories on how to revive manufacturing in this country without disengaging from the world economy and wrote a book about it,” Mercury News noted.

“Khanna could end up in a runoff with Honda. Unseating a longtime incumbent still would be very hard, but we hope he succeeds.

“He is ready for the Congress of tomorrow, while Honda is a politician of the past,” it said.

“She has a stirring life story but no record in civic life, no knowledge of technology issues and murky ideas even about health care reform, which should be her forte,” it said.

“Our endorsement of Ro Khanna is not so much a repudiation of Honda as a recognition of the opportunity for an upgrade for a congressional district defined by innovation, resourcefulness and a commitment to meritocracy,” wrote the editorial board of the San Francisco Chronicle.

“Khanna will help promote those values in a USCapitol that desperately needs them,” it said.