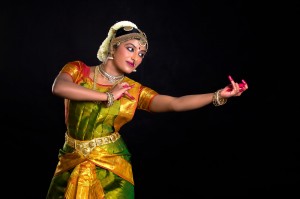 Atlanta, GA: Raji Venkat, a student of Uma Palam Pulendran, performed her arangetram (debut performance) with grace and refined technique at the Roswell Cultural Art Center recently. The audience received her dance with enthusiasm and applause. The event was presented by Natya Dhaara Center for Performing Arts, a Bharatanatyam dance school based in Atlanta, GA.

Raji began her program with Bhoomanjali which was followed by Tisra gati Alarippu.  The Alarippu was specially choreographed in an innovative style with contrasting sharp and smooth movements which typify Uma’s style of innovative choreography and Raji executed it with precision and grace. Following the invocatory items, Raji performed a traditional Jathiswaram in Ragamalika set to Misra Chaapu talam. 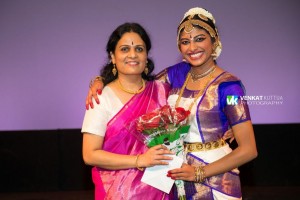 Raji completed her first half of the program with the most important item of the repertoire, the Varnam.  Composed by Papanasam Sivan “Swami Nee,” in ragam Sriranjani set to adi talam the 30 minute piece proved Raji’s ability to keep the audience engaged. The varnam consisted of rhythmic jathis and intense abhinaya, and Raji did full justice to Sringara Bhakti in describing the pining nayiki in the Varnam.

The next piece was the magnificent Keerthanam “Adum Padanai” in ragam Lathangi set to Adi talam which highlighted the majestic dance of Nataraja.  Natraja, the Cosmic Dancer possess the Ganga, fire, axe and deer and is worshiped by the two sages, Patanjali and Vyakrapada in Tillai.  Uma’s elegant and avant-garde choreography was exhibited in this piece.  Raji was the perfect dancer for this choreography where she was able to exhibit her athletic skills.   This piece was received with great enthusiasm.

The Padam “Indendu, followed the keerthanam.  A pure and multilayered expressive piece, the Nayika (Heroine) is angry with the Nayaka (Hero) Lord Sri Rangesha demanding him to leave!  Raji performed this pure abhinaya piece with sophisticated expressions and élan.

Raji’s penultimate item of her program was a Thillana by Balamurali Krishna, in ragam Kadanakudukulam set to adi talam. This Tillana was characterized by joy, exuberance and intricate footwork.

She concluded her program with a deep and sublime piece Prashanti – Prayer, composed by Pandit Ravi Shankar and Philip Glass.  This concluding item was a fitting tribute to the Great Maestro Pandit Shri Ravi Shankar who recently passed away.

Raji, was fortunate to have Guru, Professor C V Chandrasekhar, a great legend and bharatanatyam exponent and receive blessings and words of encouragement from him during her arangetram.

Raji was ably supported by a stellar music ensemble with Uma Palam Pulendran leading on the nattuvangam (cymbals), Shaaranya Pillai on the vocals with mellifluous voice, Rohan Krishnamurthy on the mridangam (percussion), Gokul Kumar on the violin and G S Rajan on the flute.