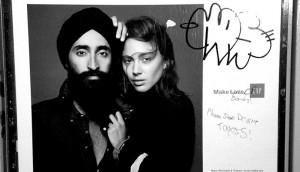 New York, Nov 28 (IANS) The Indian American community has been stunned by the racist graffiti on a Gap advertisement featuring Sikh actor and model Waris Ahluwalia at a New York City subway station.

One of the posters featured the turbaned Ahluwahlia, next to Quentin Jones, a model and filmmaker — with a caption that read “Make Love”. This was followed by the brand’s logo.

An unidentified New York vandal crossed out “Make Love”, only to replace it with “Make Bombs.” Shockingly, someone also wrote under the ad’s caption: “Please stop driving taxis.”

To ensure the situation didn’t spiral out of control, Gap has taken immediate action to show its support of Ahluwalia and the Sikh community by featuring him on its Twitter and Facebook profiles.

It also asked journalist Arsalan Iftikhar, who had alerted them about the defaced ad, to share the details of the location of the billboard to remove the racist graffiti.

“Gap is a brand that celebrates inclusion and diversity. Our customers and employees are of many different ethnicities, faiths and lifestyles and we support them all,” the company told The New York Daily News.

Gap spokesperson Kari Shellhorn told The News that the company plans to erase all signs of the offensive remarks.

Ahluwalia, who hails from near Amritsar in India, is a well-known fashion designer and actor who is frequently listed among the best-dressed and most stylish men in the entertainment and fashion industries.

As an actor, Ahluwalia is perhaps best remembered for his small roles in Wes Anderson films like “The Darjeeling Express” and his small but memorable turn in Spike Lee’s 2006 crime thriller “Inside Man”, starring Denzel Washington and Jodie Foster.

NAPA executive director Satnam Singh Chahal said the perpetrators should be brought to book at the earliest and punished.