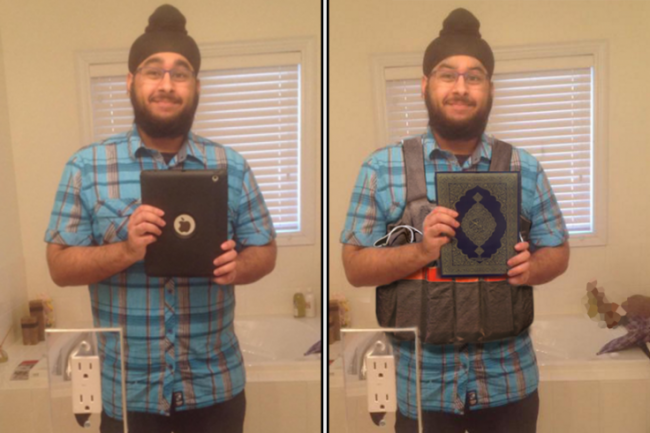 New York, Nov 19 (IANS) The US Sikh community has condemned a doctored photograph on social media that falsely depicted a Sikh-Canadian journalist as a terrorist involved in the November 13 Paris attacks.

An old photograph of Veerender Jubbal holding an iPad was doctored to make it look like the photograph of a terrorist and was posted on social media shortly after the terror attacks in Paris, NBCnews.com reported.

Jubbal’s doctored photograph showed him wearing a suicide bomb vest and the iPad in the photograph was changed to look like a Quran.

Media outlets in Europe published the photo dubbing him a terrorist.

“By photoshopping an image of a Sikh man to depict him as a terrorist, and, worse, amplifying it through social and print media in the guise of legitimate news, an entire group of people is subjected to discrimination and hate violence,” said Prabhjot Singh, director of a New York-based medicine school.

“I know this first hand, both as an advocate for quantifying the impact of hate crimes on Sikhs, Muslims and other targeted groups, but also as a person who had his jaw fractured in a hate crime,” he added.

Jubbal had earlier in the week said he was deeply disturbed by the incident.

“The broader impact of this image going viral for the Sikh community is what upsets me the most. Sikh articles of faith, such as our turbans and beards, represent a commitment to universal justice, equality, and helping others, yet Sikhs continue to be mistakenly and offensively associated with terrorist networks abroad,” Jubbal said in a statement to the Sikh Coalition.