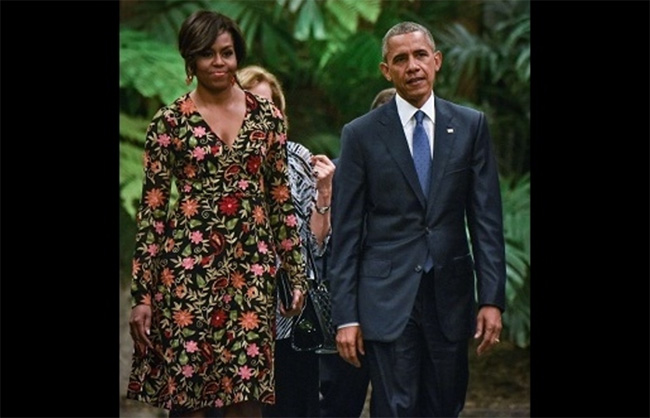 New York, March 23 (IANS) US First Lady Michelle Obama chose a floral dress made of Kashmiri fabric and embroidery by Indian-American designer Naeem Khan for dinner on the concluding day of the Obamas’ visit to Cuba on Tuesday.

“The dress Michelle Obama selected for the Cuban dinner was in a Kashmiri fabric,” the New York Times reported.

“It was embroidered with an Indian floral motif, and was similar to one in the same fabric from the designer’s pre-fall collection,” it added.

The embroidery on the gown was Kashmir’s traditional “Ari work”.

Celebrated designer Khan told the media “after what America has done for me, coming from India, I need to give back to this country”.

“She (Michelle Obama) has made my brand and put America back in fashion,” he said. “I would do anything for her.”

Barack Obama is the first US President since 1928 to undertake a three-day visit to Cuba along with his wife Michelle Obama and senior officials. He arrived in Cuba on Sunday.