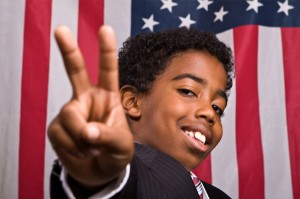 Washington, Nov 19 (IANS) If your child is not enthusiastic about your political or ideological inclinations, do not be surprised. More than half of all children in the US either misperceive or reject their parents’ political party affiliations, a new study found.

The researchers found that more discussion about politics in the home increases the probability that children correctly identify their parents’ party affiliations, but does not increase the likelihood that they will adopt those affiliations.

“Prior to our work, existing research concluded that when parents and children were similar, parents passed on their political values,” said co-author Peter K. Hatemi from Pennsylvania State University.

However, an analysis of two family-based surveys threw up interesting results.

In one sample of 8,636 families in the US, 51.2 percent of children misperceived or rejected their mothers’ political party identification.

In the second sample of 3,356 families, 53.5 percent of children misperceived or rejected their mothers’ political party affiliation, and 54.2 percent did so for their fathers’ identification.

“In order for true transmission to occur, children must actually know their parents’ political values and then choose to adopt them,” Ojeda noted.

The study is scheduled to appear in the December issue of the American Sociological Review (ASR).