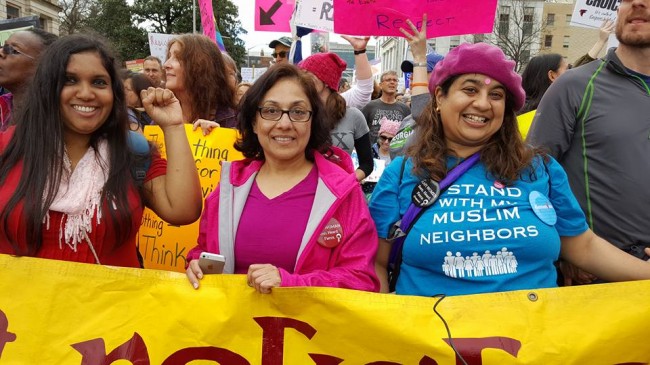 The Atlanta marchers walked in solidarity with hundreds of thousands of people who gathered in Washington DC to take part in the Women’s March on Washington, one of the biggest demonstrations in US history. 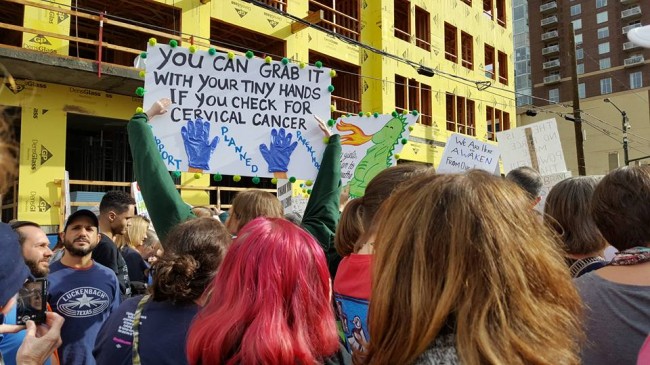 According to media reports, as many as 500,000 people marched in the US capital. By mid-afternoon, organizers had decided the crowd was too big to formally march to the White House, although protesters were already on the move and speakers were still exhorting them to head toward the Ellipse.

“They are going to tell the crowd they can go to the Ellipse if they want, but they are not doing the normal parade route, there is too many people,” The Washington Post quoted Chris Geldart, Director of the D.C. Homeland Security and Emergency Management Agency as saying.

Similar scenes unfolded around the country. In Chicago, after a 150,000 demonstrators swamped downtown blocks, officials cancelled the march portion of the event.

EFE observed that metro stations in the Washington metropolitan area were packed early Saturday with people heading for the march, which was promoted by Hollywood stars and other celebrities including Scarlett Johansson, Katy Perry, Julianne Moore and America Ferrera.

Ferrera, a Honduran native, was one of the first speakers at a rally point set up near the Capitol building, saying it was a sad time to be a woman and an immigrant in the US.

The march that began at 1.15 pm near the rally point, proceeded down the National Mall and was scheduled to conclude at 4.00 p.m. (Local Time) at the Washington Monument.

Democratic presidential candidate Hillary Clinton, whom Trump defeated in the November 8 election, praised the demonstrators in a Saturday morning tweet.

“Thanks for standing, speaking & marching for our values @womensmarch. Important as ever. I truly believe we’re always Stronger Together,” Clinton wrote on Twitter.

Feminist icon Gloria Steinem, 82, who was among the first speakers, looked out over the huge crowd and exulted, “This is the upside of the downside. This is an outpouring of democracy like I have never seen in my very long life.”

Among the symbols of the march were pink pussycat hats, which thousands of demonstrators were wearing to mock Trump for comments caught on a 2005 video clip, in which the then reality TV star boasted about leveraging his celebrity status to grope women with impunity.

Hundreds of sister marches were also taking place on Saturday across the US, while demonstrations were also held in cities such as Buenos Aires, Lima, Bogota, Madrid, Barcelona and Granada, Spain.

Protesters who are against Donald Trump’s presidency also took to the street in London and other major cities in Britain.

The Women’s March in London started at the American Embassy in London and, after a long walk, the protesters ended up rallying in Trafalgar Square, Xinhua news agency reported.

Slogans such as “reject hate, reclaim politics” and “no to racism, no to Trump” were seen on placards.

The organisers of the London march claimed that as many as 100,000 people participated in the campaign, which has not been confirmed by local police.

Meanwhile, cities like Manchester, Edinburgh, Belfast, Liverpool and Cardiff also saw protests against the US President.

The origin for the mass march was a group of young people who could not believe that Trump, who has been the target of sexual assault allegations by several female accusers and has made denigrating comments about women, won the presidency.

Since then, the movement has grown and now encompasses a wide range of progressive demands, from equal pay for women to abortion rights to the defence of the rights of immigrants, gays and Muslims, as well as labour and environmental concerns.